Charente (Saintongeais: Chérente, Occitan: Charanta) is a department in southwestern France, in the Nouvelle-Aquitaine region.

It is named after the Charente river, the most important river in the department. The two largest towns of the department, Angoulême and Cognac, are along this river.

Charente is one of the 83 French departments made during the French revolution, on 4 March 1790. It was created from the old province of Angoumois with lands around Angoulême.

In 1800, with the creation of the arrondissements in France, the six districts were changed into five arrondissements: Angoulême, Barbezieux, Cognac, Confolens and Ruffec.

On 10 September 1926, the arrondissements of Barbezieux and Ruffec were eliminated.

The highest point of the department is Rocher aux Oiseaux, 368 m (1,207 ft) high, in the commune of Montrollet; the lowest point is in the valley of the Charente river, commune of Merpins, and is 8 m (26 ft) high.

The department is bordered by the departments: Deux-Sèvres, Vienne, Haute-Vienne, Dordogne and Charente-Maritime.

The main river in the department is the Charente that gives its name to the department. Other rivers are the Dronne and the Vienne.

The climate of Cognac is an oceanic climate with template summers, Cfb (Marine West Coast Climate) in the Köppen climate classification.

The department is managed by the Departmental Council of the Charente in Angoulême. Charente is part of the region of Nouvelle-Aquitaine.

There are 3 arrondissements (districts), 19 cantons and 383 communes (municipalities) in Charente.

The following is a list of the 19 cantons of the Charente department (with their INSEE codes), following the French canton reorganisation which came into effect in March 2015:

The inhabitants of Charente are known, in French, as Charentais (women: Charentaises).

Evolution of the population in Charente-Maritime 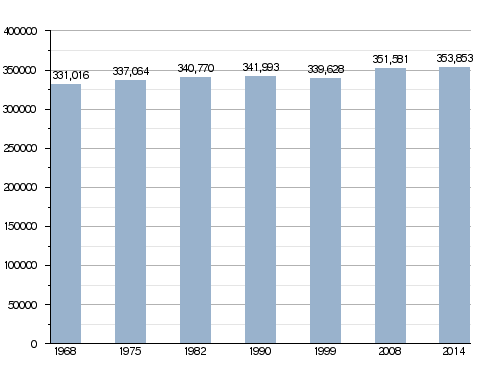 The cognac is an alcoholic drink, a kind of brandy. It is made from grapes. It is made mainly around the city of Cognac.

All content from Kiddle encyclopedia articles (including the article images and facts) can be freely used under Attribution-ShareAlike license, unless stated otherwise. Cite this article:
Charente Facts for Kids. Kiddle Encyclopedia.