Deux-Sèvres is a department in western France, in the Nouvelle-Aquitaine region.

Deux-Sèvres means literally "Two Sèvres": the Sèvre Nantaise and the Sèvre Niortaise; these are two rivers which flow through the department.

Deux-Sèvres is one of the 83 French departments made during the French revolution, on 4 March 1790.

The new department had six districts: Melle, Niort, Saint-Maixent, Parthenay, Thouars and Châtillon (today Mauléon). The capital (now prefecture) was Niort alternating Saint-Maixent and Parthenay but soon only Niort was the only capital.

In 1800, with the creation of the arrondissements in France, the six districts were changed into four arrondissements: Melle, Niort, Parthenay and Thouars. Thouars was changed by Bressuire in 1804.

The borders of the department were changed in 1973 when the inhabitants of the little commune of Puy-Saint-Bonnet joined the commune of Cholet in the neighbouring department of Maine-et-Loire.

The highest point of the department is Terrier de Saint-Martin, 272 m (892 ft) high, in the commune of Saint-Martin-du-Fouilloux.

The climate of Niort is an oceanic climate with template summers, Cfb (Marine West Coast Climate) in the Köppen climate classification.

The department is managed by the Departamental Council of the Deux-Sèvres in Niort. Deux-Sèvres is part of the region of Nouvelle-Aquitaine.

There are 3 arrondissements (districts), 17 cantons and 293 communes (municipalities) in Deux-Sèvres.

The following is a list of the 17 cantons of the Deux-Sèvres department, following the French canton reorganisation which came into effect in March 2015:

The inhabitants of Deux-Sèvres are known, in French, as Deux-Sévriens (women: Deux-Sévriennes).

Evolution of the population in Deux-Sèvres 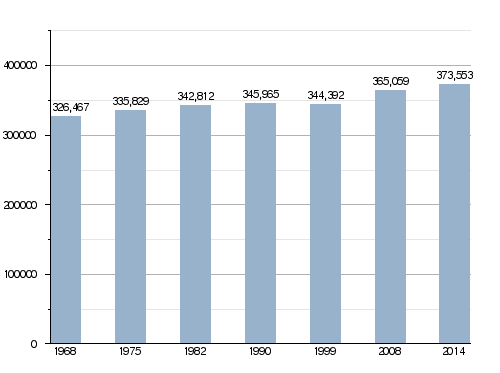 The department is still a very rural area, with a large proportion of the land of the department used for farming. Wheat and oats are the main products grown, as well as potatoes, apples, and walnuts. There are many vineyards in the north.

All content from Kiddle encyclopedia articles (including the article images and facts) can be freely used under Attribution-ShareAlike license, unless stated otherwise. Cite this article:
Deux-Sèvres Facts for Kids. Kiddle Encyclopedia.