The Sèvre Nantaise is a river in western France, a left tributary of the Loire river.

It starts in the Deux-Sèvres department (named "Two Sèvres" after this and the Sèvre Niortaise river that flows through Niort) and ends in the city of Nantes (and is the origin of the second part of the river's name).

Its average yearly discharge (volume of water which passes through a section of the river per unit of time) is 23.60 m3/s (833 cu ft/s) at Nantes, where the Sèvre Nantaise joins the Loire river. 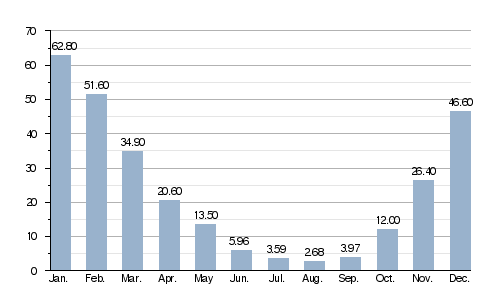 The Sèvre Nantaise starts in the Gâtines plateau, commune of Neuvy-Bouin, near the commune of Secondigny in the Deux-Sèvres department, at an elevation of about 210 m (689 ft). It then flows to the northwest through the departments of Vendée, Maine-et-Loire and Loire-Atlantique.

Finally, the river flows into the Loire river in the city of Nantes.

The Sèvre Nantaise flows through 2 regions, 4 departments and 44 communes:

The main tributaries of the Sèvre Nantaise river are:

All content from Kiddle encyclopedia articles (including the article images and facts) can be freely used under Attribution-ShareAlike license, unless stated otherwise. Cite this article:
Sèvre Nantaise Facts for Kids. Kiddle Encyclopedia.