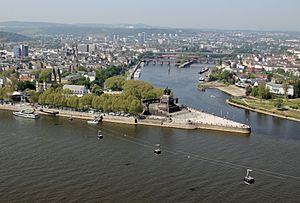 Confluence of rivers The Mosel flows into the Rhein at Koblenz 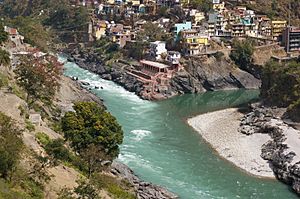 Confluence of the Bhagirathi and Alaknanda Rivers to produce the Ganges at Devprayag, India 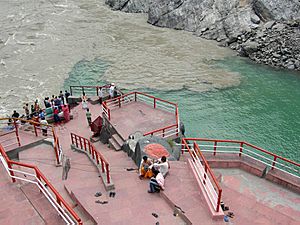 The same confluence viewed from upstream at a different time; note the swirl of sediment from the Alaknanda

In geography, a confluence (also: conflux) occurs where two or more flowing bodies of water join together to form a single channel. A confluence can occur in several configurations: at the point where a tributary joins a larger river (main stem); or where two streams meet to become the source of a river of a new name (such as the confluence of the Monongahela and Allegheny rivers at Pittsburgh, forming the Ohio); or where two separated channels of a river (forming a river island) rejoin at the downstream end.

River confluences often reveal differences in color between the two streams. According to Lynch, "the color of each river is determined by many things: type and amount of vegetation in the watershed, geological properties, dissolved chemicals, sediments and biologic content -- usually algae." Lynch also notes that color differences can persist for miles downstream before they finally blend completely.

Since rivers often serve as political boundaries, confluences sometimes demarcate three abutting political entities, such as nations, states, or provinces, forming a tripoint. Various examples are found in the list below.

A number of major cities, such as Lyon, Khartoum, and St. Louis, arose at confluences; further examples appear in the list. Within a city, a confluence often forms a visually prominent point, so that confluences are sometimes chosen as the site of prominent public buildings or monuments, as in Koblenz, Lyon, and Winnipeg. Cities also often build parks at confluences, sometimes as projects of municipal improvement, as at Portland and Pittsburgh. In other cases, a confluence is an industrial site, as in Philadelphia or Mannheim. Often a confluence lies in the shared floodplain of the two rivers and nothing is built on it, for example at Manaus, described below. 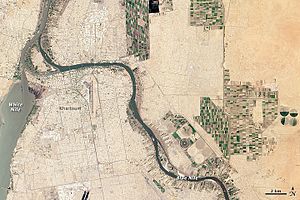 The confluence of the Jialing and the Yangtze in Chongqing. The Yangtze flows left to right across the bottom of the image.

The Seine becomes a single channel at the west end of the Île de la Cité in Paris. The Pont Neuf can be seen.

The Mosel flows into the Rhine at Koblenz 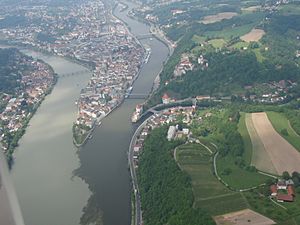 The triple confluence in Passau; from left to right, the Inn, the Danube, and the Ilz 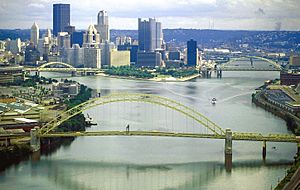 The confluence of the Allegheny and Monongahela at Pittsburgh, forming the Ohio 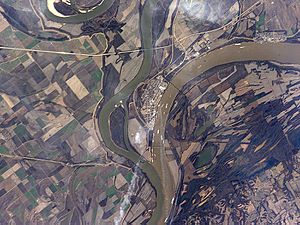 The Ohio flows into the Mississippi at Cairo. 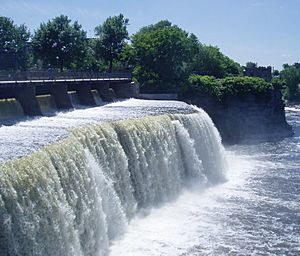 The Rideau Falls in Ottawa, where the Rideau River tumbles into Ottawa River at its mouth 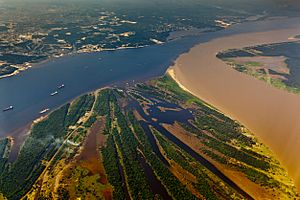 The confluence of the Rio Negro (black) and the Rio Solimões (turbid) near Manaus, Brazil

Confluences not of two rivers

Occasionally "confluence" is used to describe the meeting of tidal or other non-riverine bodies of water, such as two canals or a canal and a lake. A one-mile (1.6 km) portion of the Industrial Canal in New Orleans accommodates the Gulf Intracoastal Waterway and the Mississippi River-Gulf Outlet Canal; therefore those three waterways are confluent there.

The term confluence also applies to the merger of the flow of two glaciers. For sample images, see Gallery below.

All content from Kiddle encyclopedia articles (including the article images and facts) can be freely used under Attribution-ShareAlike license, unless stated otherwise. Cite this article:
Confluence Facts for Kids. Kiddle Encyclopedia.