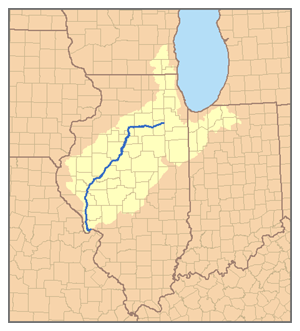 Map of the Illinois River watershed.

The Illinois River is a river in the United States. It is in the state of Illinois. It is an important tributary of the Mississippi River. The length of the river is about 439 km.

The source of the river is in northeastern Illinois, near the city of Joliet. It flows west across Illinois, then southwest. It passes the city of Peoria, the largest city on the river.

It flows into southwestern Illinois. It joins the Mississippi River 40 km north of Saint Louis, Missouri. There is separate Illinois river that runs through the northernmost edge of Oklahoma.

The river was used for transportation by the Native Americans. It was also used by early French trappers. It was an important route between the Mississippi River and the Great Lakes.

In the 19th century a canal was built that connected the river to Lake Michigan. Large ships now use this canal to go from the Great Lakes to the Mississippi River. The canal goes through the city of Chicago. It is one of the reasons that Chicago became a big city.

All content from Kiddle encyclopedia articles (including the article images and facts) can be freely used under Attribution-ShareAlike license, unless stated otherwise. Cite this article:
Illinois River Facts for Kids. Kiddle Encyclopedia.