Ottawa is a city located at the confluence of the navigable Illinois River and Fox River in LaSalle County, Illinois, United States. The Illinois River is a conduit for river barges and connects Lake Michigan at Chicago, to the Mississippi River, and North America's 25,000 mile river system. The population estimate was 18,063, as of 2019. It is the county seat of LaSalle County and it is the principal city of the Ottawa, IL Micropolitan Statistical Area. 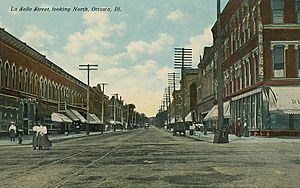 Ottawa was the site of the first of the Lincoln-Douglas debates of 1858. During the Ottawa debate Stephen A. Douglas, leader of the Democratic Party, openly accused Abraham Lincoln of forming a secret bipartisan group of Congressmen to bring about the abolition of slavery.

The John Hossack House was a "station" on the Underground Railroad, and Ottawa was a major stop because of its rail, road, and river transportation. Citizens in the city were active within the abolitionist movement. Ottawa was the site of a famous 1859 extrication of a runaway slave named Jim Gray from a courthouse by prominent civic leaders of the time. Three of the civic leaders, John Hossack, Dr. Joseph Stout and James Stout, later stood trial in Chicago for violating the Fugitive Slave Law of 1850.

Ottawa was also important in the development of the Illinois and Michigan Canal, which terminates in LaSalle, Illinois, 12 miles to the west.

On February 8, 1910, William Dickson Boyce, then a resident of Ottawa, incorporated the Boy Scouts of America. Five years later, also in Ottawa, Boyce incorporated the Lone Scouts of America. Boyce is buried in Ottawa Avenue Cemetery. The Ottawa Scouting Museum, on Canal Street, opened to the public on December 6, 1997. The museum features the history of Boy Scouting, Girl Scouting and Camp Fire.

In 1922, the Radium Dial Company (RDC) moved from Peru, Illinois to a former high school building in Ottawa. The company employed hundreds of young women who painted watch dials using a paint called "Luna" for watch maker Westclox. RDC went out of business in 1936, two years after the company's president, Joseph Kelly Sr., left to start a competing company, Luminous Processes Inc., a few blocks away.

Ottawa has many historic homes and registered historic landmarks. Recent additions to Ottawa have included renovations to its historic mansion, Reddick Mansion, and artistic murals throughout the central business district. Ottawa is known as the scenic gateway to Starved Rock State Park, the most popular state park in Illinois, with some 2 million visitors per year. The Fox River, which flows through communities like Elgin and Aurora, empties into the Illinois in downtown Ottawa. Ottawa is also home to one of the largest skydiving operations in the country, Skydive Chicago.

Once an old Norwegian Lutheran Church, Norsk Museum is located 9 miles northeast of Ottawa, on Highway 71. The museum is dedicated to the Scandinavian settlers who founded the area around neighboring Norway, Illinois, in the 1800s.

Jacob C. Zeller founded the Zeller Inn and Court Place Tavern in 1871, at 615 Columbus Street. The original Zeller Inn was demolished in 1982. The Zeller Inn tavern, originally known as the Court Place, still remains, now called Zeller Inn. The courtyard patio area on Columbus street is where the original Zeller Inn stood. The tavern contains the original mahogany bar built by the Sanders Bros in Ottawa, marble counters, tiled floors and walls, stained glass door and light fixtures. It also was known for its Gilded Age brilliance — tiled mahogany bar, carved gargoyles, pressed-tin ceiling and solid oak backbar. The mirror on the bar is the same since its establishment in 1871, which was brought over from the 1800s era European Worlds Fair. Zeller's initials, JCZ, are still visible in a tiled mosaic on the side of the bar and in the glass light domes that hang from the ceiling. This is one of the oldest taverns in Illinois, with original features which remain intact and displays the architectural details prominent in the late 1800s.

All content from Kiddle encyclopedia articles (including the article images and facts) can be freely used under Attribution-ShareAlike license, unless stated otherwise. Cite this article:
Ottawa, Illinois Facts for Kids. Kiddle Encyclopedia.