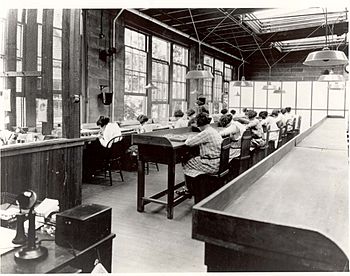 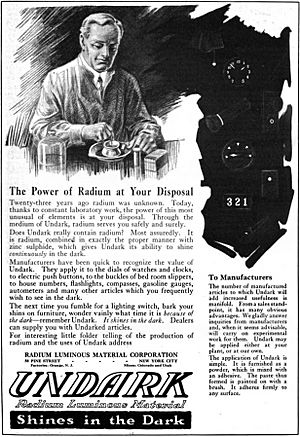 Radium girls were a group of female factory workers who sued their employer in 1917.

These workers, at a factory on Orange, New Jersey, had to paint the dials of watches, so that the numbers on them would glow in the dark. The substance used to paint was luminous paint, which contained radium. Radium is radioactive, and causes radiation sickness. The workers used paintbrushes to draw fine lines; the brush would only draw such a line when it was wet, so it had to be licked very often. The women were told the paint was harmless. Over time, they ingested deadly amounts of it.

Five workers sued their employer. The case that followed made it clear that people could sue their employer, if they contract occupational diseases.

All content from Kiddle encyclopedia articles (including the article images and facts) can be freely used under Attribution-ShareAlike license, unless stated otherwise. Cite this article:
Radium girls Facts for Kids. Kiddle Encyclopedia.