The Boy Scouts of America or BSA is an organization for children and teens with over 5 million members across the United States. They try to give young people life values. BSA includes Cub Scouts, which is for children ages 6–11, Scouts BSA, which is for youth ages 11–17, and Venturing and Sea Scouts, for youth ages 14–20. Scouts BSA was called Boy Scouts until it started allowing girls in 2019. 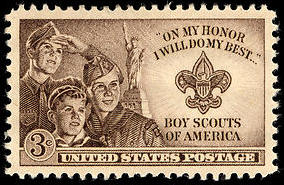 Boy Scouts of America on a 1950 stamp

The Boy Scouts of America were founded by American writer W. D. Boyce, in 1910, but were similar to Scouting groups in Great Britain and other early scout movements. James E. West helped out the BSA in its early years, but also made the BSA more religious than scouts were in Europe. Scouting grew in the 1910s and 20s due to the rise of “boy’s books” devoted to Scouting and the First World War. Scouting had many members during the 1960s, but has declined since the 1970s, despite an attempt to make scouting modern by changing requirements and adding more merit badges.

These are the words of the Scout Oath:

"On my honor I will do my best, to do my duty to God and my country and to obey the Scout Law; to help other people at all times; to keep myself physically strong, mentally awake, and morally straight".

All content from Kiddle encyclopedia articles (including the article images and facts) can be freely used under Attribution-ShareAlike license, unless stated otherwise. Cite this article:
Boy Scouts of America Facts for Kids. Kiddle Encyclopedia.