Order of the Arrow facts for kids 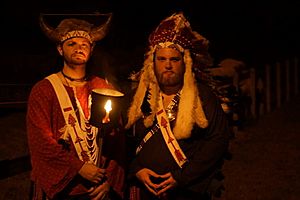 To be chosen to join the Order, youth members need to be voted in by their Scout troop, and have to have the First Class rank or higher. Adult leaders can also be chosen.

People who are entering the Order have to go through what is called an Ordeal. They have to go through a 24 hour period where they sleep outside, do not get much food, cannot talk, and do work, such as to help the camp where the Ordeal is happening. 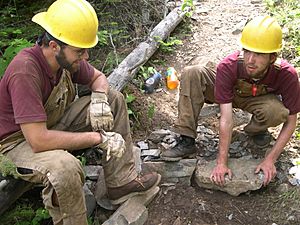 Two Arrowmen working on a trail in the Boundary Waters Canoe Area Wilderness.

Once someone goes through the Ordeal and becomes a member of the Order, they are called an Ordeal member. They can later become what is called a "Brotherhood member" after giving more service and going through another ceremony. Some Brotherhood members can later become "Vigil Members", but usually, no more than one out of every fifty people in a Lodge (local groups of the Order of the Arrow) can become Vigil Members.

All content from Kiddle encyclopedia articles (including the article images and facts) can be freely used under Attribution-ShareAlike license, unless stated otherwise. Cite this article:
Order of the Arrow Facts for Kids. Kiddle Encyclopedia.