Irving ( UR-ving) is a principal city located in Dallas County in the U.S. state of Texas. According to a 2013 estimate from the United States Census Bureau, the city population was 228,653 making it the thirteenth most populous city in Texas. Irving is part of the Dallas–Fort Worth metroplex.

Irving includes the Las Colinas community, one of the first master-planned developments in the United States and once the largest mixed-use development in the Southwest with a land area of more than 12,000 acres (4,856 ha). Las Colinas is home to the Mustangs at Las Colinas, which is the largest equine sculpture in the world, as well as many Fortune 500 companies, such as ExxonMobil, Kimberly-Clark and Fluor Corporation. In January 2011 the city completed the Irving Convention Center at Las Colinas and continues to develop the area into a mixed-use complex including a special entertainment district.

Part of Dallas/Fort Worth International Airport lies inside the city limits of Irving. 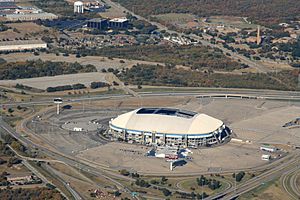 Texas Stadium, the now-demolished former home of the Dallas Cowboys in Irving.

Irving was founded in 1903 by J.O. "Otto" Schulze and Otis Brown. It is believed that literary author Washington Irving was a favorite of Netta Barcus Brown, and consequently the name of the town site, Irving, was chosen. Irving originally began in 1889 as an area called Gorbit, and in 1894 the name changed to Kit. Irving was incorporated April 14, 1914, with Otis Brown as the first mayor.

By the late nineteenth century the Irving area was the site of churches, two cotton gins, a blacksmith shop and a general store. The Irving district public school system dates back to the 1909 establishment of Kit and Lively schools. Population growth was slow and sometimes halting, with only 357 residents in 1925, but a significant increase began in the 1930s.

By the early 1960s the city had a population of approximately 45,000. A number of manufacturing plants operated in Irving, along with transportation, retail and financial businesses. The University of Dallas in Irving opened in 1956, and Texas Stadium was completed in 1971 as the home field of the Dallas Cowboys.

Joseph Rice recorded the history of Irving in his 1989 book, Irving: A Texas Odyssey (Northridge, California: Windsor Publications ISBN 978-0-89781-300-6). Rice explored Irving's past and culture in his treatment of the city.

May is the average wettest month.

There were 76,241 households out of which 31.3% had children under the age of 18 living with them, 44.1% were married couples living together, 11.2% had a female householder with no husband present, and 39.4% were non-families. 31.3% of all households were made up of individuals and 3.8% had someone living alone who was 65 years of age or older. The average household size was 2.50 and the average family size was 3.19.

There were 82,538 households out of which 33.4% had children under the age of 18 living with them, 43.1% were married couples living together, 13.6% had a female householder with no husband present, and 37.5% were non-families. 30.1% of all households were made up of individuals and 4.5% had someone living alone who was 65 years of age or older. The average household size was 2.61 and the average family size was 3.31.

In 2010, 41% of the city's population was of Hispanic or Latino origin. The largest group is those of Mexican origin, while those of Salvadoran heritage form the second largest group; in 2009 they formed 11.8% of those born outside of the United States. The Hispanic and Latino residents have moved into areas of eastern Irving, which contain older neighborhoods than other areas of Irving.

The largest Asian ethnic group in Irving is the Asian Indians. As of 2009 the Indians have mainly settled in proximity to high technology companies, into an area in western Irving along Texas State Highway 114, In order to absorb the Indian population, dense condominium and rental properties have opened in western Irving.

Irving is traversed by numerous highways. The Airport Freeway, SH 183, runs east-west in the center of the city, while LBJ Freeway or I-635 crosses the northern edge of the city in the same direction. John Carpenter Freeway, SH 114, and the President George Bush Turnpike create an X running northwest-to-southeast and southwest-to-northeast respectively. The Las Colinas area is centered near the intersection of 114 and the Bush turnpike.

Irving is one of 13 member-cities of the Dallas region's transit agency, Dallas Area Rapid Transit (DART). Currently, Irving is served by numerous bus routes and has two stops along the Trinity Railway Express route. In addition, DART's Orange Line through runs through Irving and Las Colinas to DFW Airport. This connects northern Irving with Dallas through rail in addition to existing bus routes.

The Las Colinas Urban Center is served by the Las Colinas APT System, a people-mover connecting businesses and entertainment areas.

Irving has a sister city relationship with six cities:

All content from Kiddle encyclopedia articles (including the article images and facts) can be freely used under Attribution-ShareAlike license, unless stated otherwise. Cite this article:
Irving, Texas Facts for Kids. Kiddle Encyclopedia.