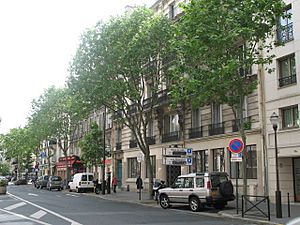 A street in Boulogne-Billancourt

Consequently, Boulogne-Billancourt is one of the most densely populated municipalities in Europe. It is also home to major communication companies headquarters. The hospital Ambroise-Paré Hospital is located in the city and one campus of the École supérieure des sciences commerciales d'Angers.

All content from Kiddle encyclopedia articles (including the article images and facts) can be freely used under Attribution-ShareAlike license, unless stated otherwise. Cite this article:
Boulogne-Billancourt Facts for Kids. Kiddle Encyclopedia.