Subprefectures in France facts for kids 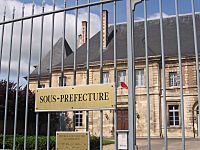 A subprefecture in Verdun, Meuse 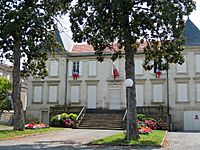 A subprefecture in Langon, Gironde

The civil servant in charge of a subprefecture is the subprefect, assisted by a general secretary. Between May 1982 and February 1988, subprefects were known instead by the title commissaire adjoint de la République.

Where the administration of an arrondissement is carried out from a prefecture, the general secretary to the prefect carries out duties equivalent to those of the subprefect.

The municipal arrondissements of Paris, Lyon, and Marseille are divisions of the city (or commune) rather than the prefecture, and so are not arrondissements in the same sense.

All content from Kiddle encyclopedia articles (including the article images and facts) can be freely used under Attribution-ShareAlike license, unless stated otherwise. Cite this article:
Subprefectures in France Facts for Kids. Kiddle Encyclopedia.