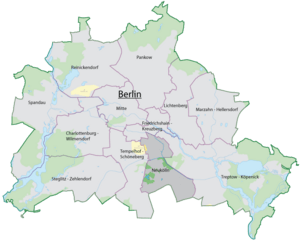 The location of Neukölln in Berlin. 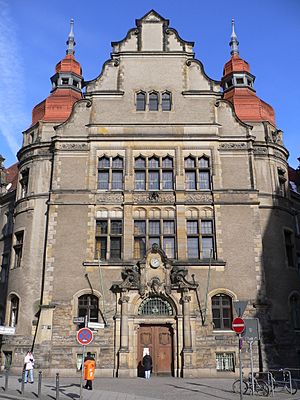 When it was first mentioned in 1360, the village was called Richardsdorf and owned by the Order of St. John

The coat of arms of the borough has a Maltese cross to remember this part of its history.

In 1737, Frederick William I of Prussia let Moravians from Bohemia settle in the area. They built their own church and houses off the village centre along the road to Berlin, which is now called Richardstraße. The new Bohemian village was granted its own constitution in 1797.

On 1 May 1899 the area, then the largest village of Prussia, became an independent city and got its current name in 1912. Its independence ended in 1920, when it was made part of Greater Berlin German: Groß-Berlin. Between 1966 and 1975, the "Gropiusstadt" was built. This city-within-a-city German: Trabantenstadt was designed by architect Walter Gropius. Gropius was the last director of the Bauhaus school of arts and architecture, which set up in Berlin when it moved from Dessau. Gropiusstadt has over 60,000 inhabitants.

All content from Kiddle encyclopedia articles (including the article images and facts) can be freely used under Attribution-ShareAlike license, unless stated otherwise. Cite this article:
Neukölln Facts for Kids. Kiddle Encyclopedia.