Walter Adolph Georg Gropius (18 May 1883 – 5 July 1969) was a German architect and founder of the Bauhaus School, who, along with Alvar Aalto, Ludwig Mies van der Rohe, Le Corbusier and Frank Lloyd Wright, is widely regarded as one of the pioneering masters of modernist architecture. Gropius was also a leading architect of the International Style.

Born in Berlin, Walter Gropius was the third child of Walter Adolph Gropius and Manon Auguste Pauline Scharnweber (1855–1933), daughter of the Prussian politician Georg Schwarnweber (1816-1894). Walter's uncle Martin Gropius (1824-1880) was the architect of the Kunstgewerbemuseum in Berlin and a follower of Karl Friedrich Schinkel, with whom Walter's great-grandfather Carl Gropius, who fought under Field Marshal Gebhard Leberecht von Blücher at the Battle of Waterloo, had shared a flat as a bachelor. 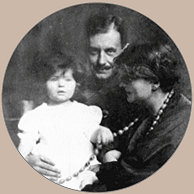 Manon Gropius with her parents Alma Mahler and Walter Gropius, 1918

In 1915 Gropius married Alma Mahler (1879–1964), widow of Gustav Mahler. Walter and Alma's daughter, named Manon after Walter's mother, was born in 1916. When Manon died of polio at age 18, in 1935, composer Alban Berg wrote his Violin Concerto in memory of her (it is inscribed "to the memory of an angel"). Gropius and Alma divorced in 1920. (Alma had by that time established a relationship with Franz Werfel, whom she later married.) On 16 October 1923, Gropius married Ilse (later changed to Ise) Frank, and they remained together until his death in 1969. They adopted a daughter together, Beate Gropius, known as Ati. Ise Gropius died on 9 June 1983 in Lexington, Massachusetts. Walter's only sister Manon Burchard, née Gropius, is the great-grandmother of the German film and theater actresses Marie Burchard and Bettina Burchard and of the curator and art historian Wolf Burchard.

Gropius died on July 5, 1969, in Boston, Massachusetts, aged 86. Walter Gropius was diagnosed with an illness that consisted of an inflammation of the glands, and was admitted to the hospital on 7 June. After a necessary operation performed on 15 June ended successfully there was hope of a full recovery. Gropius described himself as a "tough old bird" and continued to make progress for about a week. His lungs became congested and could not supply proper amounts of oxygen to the blood and brain and he lost consciousness and died in his sleep early Sunday morning.

Today, Gropius is remembered not only by his various buildings but also by the district of Gropiusstadt in Berlin. In the early 1990s, a series of books entitled The Walter Gropius Archive was published covering his entire architectural career. The CD audiobook Bauhaus Reviewed 1919–33 includes a lengthy English Language interview with Gropius.

Upon his death his widow, Ise Gropius, arranged to have his collection of papers divided into early and late papers. Both parts were photographed with funds provided by the Thyssen Foundation. The late papers, relating to Gropius's career after 1937, and the photos of the early ones, then went to the Houghton Library at Harvard University; the early papers and photos of the late papers went to the Bauhaus Archiv, then in Darmstadt, since reestablished in Berlin. Mrs. Gropius also deeded the Gropius House in Lincoln to Historic New England in 1980. The Gropius house was added to the National Register of Historic Places in 1988 and is now available to the public for tours.

Bauhaus Center Tel Aviv in the White City recognizes the greatest concentration of Bauhaus buildings in the world. 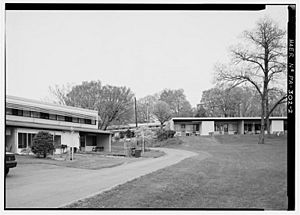 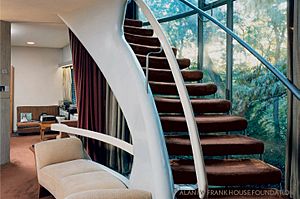 The Alan I W Frank House

All content from Kiddle encyclopedia articles (including the article images and facts) can be freely used under Attribution-ShareAlike license, unless stated otherwise. Cite this article:
Walter Gropius Facts for Kids. Kiddle Encyclopedia.