Shaker Heights is a city in Cuyahoga County, Ohio, United States. As of the 2020 Census, the city population was 29,439. Shaker Heights is an inner-ring streetcar suburb of Cleveland, abutting the eastern edge of the city's limits. In July 1911, a petition by property owners was successful in detaching a long strip of land from the south of Cleveland Heights, to be named Shaker Village. In November 1911, the voters of Shaker Village formed Shaker Heights Village, which was incorporated in January 1912. It is the birthplace of the actor Paul Newman.

Shaker Heights was a planned community developed by the Van Sweringen brothers, railroad moguls who envisioned the community as a suburban retreat from the industrial inner city of Cleveland.

Shaker Heights is roughly 1,050 feet (320 m) above sea level, and is located about 6 miles (10 km) inland from Lake Erie. Shaker Heights is drained by the Doan Brook watershed, and has several small artificial lakes: Horseshoe Lake, Green Lake, Lower Shaker Lake, and Marshall Lake. Horseshoe Lake and Lower Shaker Lake had been dammed by the Shakers, while developers added Green Lake and Marshall Lake, the latter named after drugstore chain owner W. A. Marshall, at a later point. 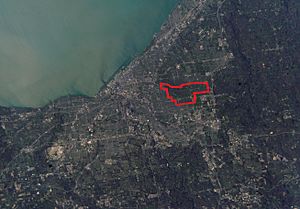 A NASA photo of Greater Cleveland, showing the relative location of Shaker Heights. 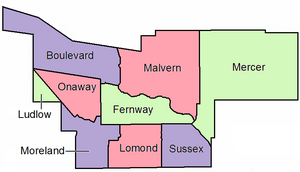 A map of the neighborhoods in Shaker Heights

The median income for a household in the city was $76,476, and the median income for a family was $105,660. The per capita income for the city was $47,360. About 5.3% of families and 8.6% of the population were below the poverty line, including 8.1% of those under age 18 and 6.5% of those age 65 or over. The unemployment rate in the city is 5.4%, one of the lowest rates for individual cities included in data provided by the Ohio Department of Job and Family Services.

About 93.5% of residents speak English natively at home, while 1.6% speak Spanish, 1.2% speak French, 0.7% speak Chinese, and 3.0% speak another language, including German, Russian and Arabic.

Educationally, Shaker Heights is above the national, state, and local averages for residents who have attained a bachelor's, master's, or above a master's degree. As of the 2010 Census, 64.5% of the city's population over the age of 25 had obtained a college degree compared to 28.6% of the same population in Cuyahoga County, 24.1% statewide, and 27.9% nationally. 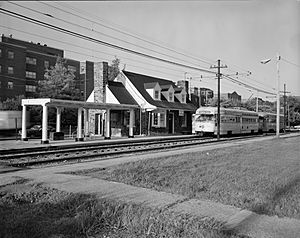 A Blue Line streetcar at the Lynnfield station. This style of car, the PCC streetcar, was replaced in 1981 with the Breda LRV car.

Ralph Russell established the North Union Shaker Settlement in 1822 with just over 80 individuals. Between 1826 and 1854, the group dammed Doan Brook, which made Upper and Lower Lake, and established three grist and a sawmills. The colony peaked around 1850 with about 300 settlers, faded away and was closed in 1889.

In 1905, the land was bought by brothers M.J. and O.P. Van Sweringen who envisioned the first garden styled suburb in Ohio for the site. The brothers constructed homes, set aside land for churches and schools, and planted trees. Originally referred to as Shaker Village, the community was incorporated in 1912 and reached city status in the 1931.

Shaker Heights is known for its stringent building codes and zoning laws, which have helped to maintain the community's housing stock and identity throughout the years. Approximately seventy-five percent of the city of Shaker Heights is listed on the National Register of Historic Places as the Shaker Village Historic District.

The Van Sweringens acquired the New York, Chicago and St. Louis Railroad (Nickel Plate Road) in order to secure the right of way needed to establish a rapid transit interurban streetcar system that would carry residents of Shaker Heights to and from downtown Cleveland. The resulting system was known as the Shaker Heights Rapid Transit. The Rapid Transit system was transferred into the Greater Cleveland Regional Transit Authority (RTA) in the 1970s, which combined the operation of all bus systems in the county with the operation of the Shaker and Cleveland Transit System west side rapid lines. Shaker Heights and Greater Cleveland refer to the system and to the trains as "The Rapid Transit", "Rapid" or "Shaker Rapid". While originally envisioned to extend from downtown Cleveland fourteen miles to the community of Hunting Valley (then called Shaker Estates), the system expansion ended at Green Road in eastern Shaker Heights following the collapse of the Van Sweringen rail empire during the Great Depression.

Efforts toward integration began in the late 1950s with neighbors in the Ludlow Elementary School area working together to make integration successful. As a result, Shaker Heights avoided many of the problems created from practices such as blockbusting and white flight. In 1986, the city began a Fund for the Future of Shaker Heights, offering loans for down payments for residents buying homes in segregated neighborhoods, creating multi-ethnic neighborhoods. Today, the city maintains a housing assistance office that works with home buyers to achieve and maintain neighborhood integration.

Shaker Heights was a finalist for the All-America City Award in 1989. 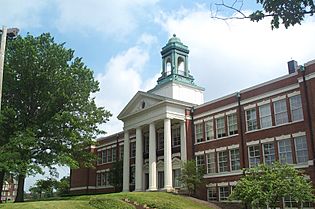 The main branch of the Shaker Heights Public Library, a member of the CLEVNET consortium.

Publicly, Shaker Heights is served by the Shaker Heights City School District, a K-12 district with an enrollment of about 5,600 students in eight total schools. There are five lower elementary schools, Fernway, Mercer, Boulevard, Lomond and Onaway; an upper elementary school, Woodbury Elementary School; Shaker Heights Middle School; and Shaker Heights High School. The district estimates that roughly 90% of Shaker graduates attend college, and has been recognized for its efforts to increase neighborhood integration. In the 1950s, the public school system was rated in the top ten nationally. In recent years, however, the school district is no longer top rated. According to the 2007-2008 State of Ohio Report Card, Shaker scored 97.1 out of a possible 120. The district is listed as "Effective," the third tier on a 6 tier scale. On the other hand, since 1995, 9-17% of seniors at Shaker Heights High School have been recipients of National Merit Scholarship awards, and in 2008, the high school had twice as many National Merit Scholarship winners as any other public school in the state. This can possibly be explained in a 2009 survey of the school, which said that Shaker Heights High School "is really two schools – one school with students in an outstanding Advanced Placement program and one school with students with academic needs."

Private schools in the city include Laurel School, Hathaway Brown School, and the lower campus of University School. There is also a parochial school in Shaker, St. Dominic School.

The Japanese Language School of Cleveland (クリーブランド日本語補習校code: ja is deprecated , Kurīburando Nihongo Hoshūkō), a weekend Japanese school, holds its classes at the Shaker Heights campus of the Laurel School.

Two light rail lines of the GCRTA pass through and terminate in Shaker Heights. The Blue Line cuts through the median of Van Aken Boulevard, while the Green Line cuts through the median of Shaker Boulevard. The Blue and Green lines provide direct rail service to Cleveland, and are each the direct successors of former streetcar services established in 1920 and 1913 respectively. The city of Shaker Heights directly owned and operated these Shaker Heights Rapid Transit services between 1944 and 1975. 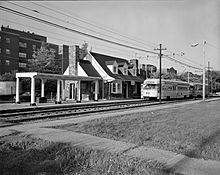 A Blue Line streetcar at the Lynnfield station. This style of car, the PCC streetcar, was replaced in 1981 with the Breda LRV car.

All content from Kiddle encyclopedia articles (including the article images and facts) can be freely used under Attribution-ShareAlike license, unless stated otherwise. Cite this article:
Shaker Heights, Ohio Facts for Kids. Kiddle Encyclopedia.