Northeast Ohio refers to a similar but substantially larger region that is home to over 4.5 million residents that also includes areas not part of Greater Cleveland. This article covers the area considered to be Greater Cleveland, but includes some information generally applicable to the larger region, which is itself part of what is known historically as the Connecticut Western Reserve.

Changes in house prices for Greater Cleveland are publicly tracked on a regular basis using the Case–Shiller index; the statistic is published by Standard & Poor's and is also a component of S&P's 20-city composite index of the value of the U.S. residential real estate market.

The Cleveland-Akron-Canton television Designated Market Area covers this area, and all of Northeast Ohio except for the Youngstown/Warren region. It is the 18th largest in the United States, according to Nielsen Media Research. Changes in house prices for Greater Cleveland are publicly tracked on a regular basis using the Case–Shiller index; the statistic is published by Standard & Poor's and is also a component of S&P's 20-city composite index of the value of the U.S. residential real estate market. The Greater Cleveland area is also part of the larger Great Lakes Megalopolis.

These, in decreasing order of population, are the eight largest cities in Greater Cleveland of (2010): 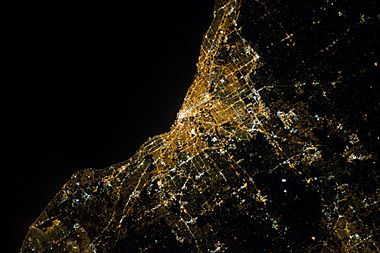 The median income for a household in Greater Cleveland was $46,231 and the median income for a family, $59,611. The per capita income was $25,668. Persons living below the poverty line was 15.1%. According to a study by Capgemini and the World Wealth Report by Merrill Lynch, the Cleveland area has nearly 54,000 millionaire households, and is expected to continue to grow at 17% over the next five years.

The Greater Cleveland area is the most diverse region in the state of Ohio and is becoming increasingly more diverse with new waves of immigration. As of 2010, both the Hispanic and Asian population in the Cleveland-Akron-Ashtabula area grew by almost 40%, Hispanics now number at 112,307 (up from 80,738 in 2000). The Asian population alone accounts for 55,087 (up from 39,586 in 2000) but people who cite Asian and other ethnicities enumerate 67,231. The Chinese Americans are the oldest Asian group residing in Northeast Ohio, most visible in Cleveland's Asiatown. Nevertheless, the area is also home to hundreds of Thais, Taiwanese, Pakistanis, Laotians, Cambodians, and Burmese peoples as well.

The Cleveland area has a substantial African American population with origins in the First and Second Great Migrations. It also boasts some of the nation's largest Irish, Italian (numbering over 205,000), Slavic, and Hungarian populations. At one time, the Hungarian population of Cleveland proper was so great that the city boasted of having the highest concentration of Hungarians in the world outside of Budapest. Today, the Greater Cleveland area is home to the largest Slovak, Slovene, and Hungarian communities in the world, outside of Slovakia, Slovenia, and Hungary respectively. The Slavic population of the Cleveland-Akron area comprises 17.2%, far higher than the nation's rate of 6%. There are 171,000 Poles, 38,000 Slovaks, 66,000 Slovenes, 38,000 Czechs, 31,000 Russians, and 23,000 Ukrainians in Greater Cleveland. Slavic Village and Tremont historically had some of the largest concentrations of Eastern Europeans within Cleveland proper. Today, both neighborhoods continue to be home to many Slavic Ohioans. In addition, Slovenia maintains a Consulate-General in Downtown Cleveland. The city of Cleveland has also received visits from the Presidents of Hungary and Poland.

Greater Cleveland is home to a sizable Jewish community. According to the North American Jewish Data Bank, the community comprises an estimated 86,600 people or 3.0% as of 2011, above the nation's 1.7%, and up from 81,500 in 1996. The highest proportion is in Cuyahoga County at 5.5% (of the county's total population). Today, 23% of Greater Cleveland's Jewish population is under the age of 17, and 27% reside in the Heights area (Cleveland Heights, Shaker Heights, and University Heights). In 2010 nearly 2,600 people spoke Hebrew and 1,100 Yiddish.

The top largest ancestries in the Greater Cleveland MSA, were the following:

Greater Cleveland is served by international, regional and county airports, including: 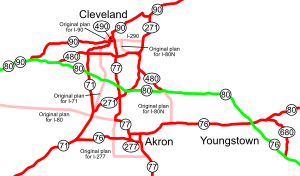 The Greater Cleveland Regional Transit Authority operates a bus system and heavy and light rail in Cuyahoga County. Other transit agencies serve the surrounding counties and provide connections with RTA, including Laketran in Lake County, and Lorain County Transit in Lorain County. Cleveland's RTA Red Line which started in 1955, is the eighth oldest heavy rail rapid transit in the Country In 2007, RTA was named the best public transit system in North America by the American Public Transportation Association, for "demonstrating achievement in efficiency and effectiveness."

Minor league hockey is represented in the area by the Cleveland Monsters of the American Hockey League. They began play in the 2007–08 AHL season at the Quicken Loans Arena. The team is the top minor league affiliate of the Columbus Blue Jackets of the National Hockey League.

The Cleveland Metroparks are a system of nature preserves that encircle the city, and the Cuyahoga Valley National Park encompasses the Cuyahoga River valley between Cleveland and Akron. The region is home to Mentor Headlands Beach, the longest natural beach on the Great Lakes. 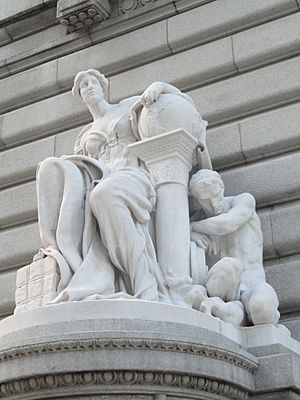 Other large employers include:

The Council of Smaller Enterprises coordinates and advocates for small businesses in the region. Many of the area's sustainability-oriented companies are tied into the network Entrepreneurs for Sustainability.

All content from Kiddle encyclopedia articles (including the article images and facts) can be freely used under Attribution-ShareAlike license, unless stated otherwise. Cite this article:
Greater Cleveland Facts for Kids. Kiddle Encyclopedia.