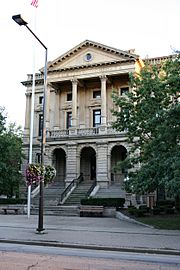 Elyria ( ǝ-LEER-ee-uh) is a city in and the county seat of Lorain County, Ohio, United States, located at the forks of the Black River in Northeast Ohio. As of the 2010 census, the city had a population of 54,533. The city is named for its founder, Heman Ely. The city is home to Lorain County Community College.

The village of Elyria was officially founded in 1817 by Heman Ely, who built a log house, dam, gristmill and sawmill on the village's site along the Black River. Ely began to build more houses to accommodate European-American settlers migrating to what was, at that time, within Huron County, Ohio. By the time Ely died in 1852, Elyria had five churches, three grocery stores, three flour mills, a newspaper, and a population of more than 1,500. Early postal service from Cleveland was provided by Artemis Beebe, a rider who held the first contract to deliver mail across this section of the Black River.

By the turn of the 20th century, Elyria was a town of about 8,000. In 1908, Elyria Memorial Hospital was built. It has since evolved into an award-winning regional healthcare system. In the first half of the 20th century, the town developed some manufacturing, as well as a range of retail businesses.

In August 1967, at the peak of Elyria's population, Midway Mall was opened. It changed the local economy by attracting local businesses from the town center or causing so much competition they went out of business. Industrial restructuring meant that good jobs left the area, and poverty increased. Three major car plant closings in the area lead to economic stagnation and joblessness in the 1970s and 1980s that affected numerous communities. The region was nicknamed "the Rustbelt," suggesting the decline of its former industries.

In the 1990s, Elyria experienced a minor revival with construction of some new roads and housing. It serves as a residential, suburban "bedroom community" for Cleveland, located to the east, where new businesses and industries are developing with an increase in new jobs.

The Black River flows through Elyria.

There were 22,400 households of which 31.6% had children under the age of 18 living with them, 39.5% were married couples living together, 17.8% had a female householder with no husband present, 5.6% had a male householder with no wife present, and 37.1% were non-families. 30.5% of all households were made up of individuals and 10.5% had someone living alone who was 65 years of age or older. The average household size was 2.39 and the average family size was 2.97.

Elyria has a large number of parks and recreational centers that include a variety of activities such as baseball, playground equipment. The four recreational centers are named after their location on the map - North, East, South, and West. They each include one or more baseball fields and at least two tennis courts. There are two main parks, Cascade and Elywood, which are connected by a drive-on ford in the center. 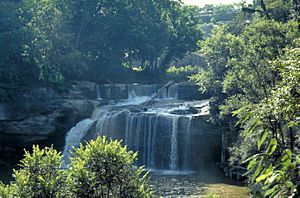 East Falls on the Black River in Cascade Park

Cascade Park is the largest and most popular park in Elyria. The park is located in a ravine carved by the same glaciers that created the Great Lakes. Cascade park has a large playground and a large hill used for seating at the 4th of July fireworks show, and is a popular spot for sledding during winter months. The park is centered along the Black River.

The park used to have three captive black bears, held in cages attached to a rock. Bears were featured in the park from 1920 to 1980.

Elyria is home to many businesses and several worldwide headquarters. Equity Trust Company, Invacare, the Ridge Tool Company, Diamond Products, Bendix Commercial Vehicle Systems, and EMC Precision Machining are all headquartered in Elyria. Riddell operates a factory in Elyria. Elyria Plating Corporation has been in the same location since 1937.

Lorain County Transit is based in Elyria. Elyria is served by many highways, including U.S. Route 20, the Ohio Turnpike, and State Routes 2, 113, 301 and 57.

The general airport for Elyria and Lorain is the Lorain County Regional Airport (located in New Russia Township), and Cleveland-Hopkins International Airport is the nearest major airport. The Elyria Amtrak Station provides train transportation. Greyhound bus service is also available in the city.

The film Take Shelter includes a scene in which Michael Shannon enters the Elyria Main branch library and looks for books. The character of Officer Richard Lymangood, in the film Blue Thunder, was born in Elyria, according to the helicopter terminal database. In the 2015 film The Bronze starring Melissa Rauch, Midway Mall was used for a number of scenes with Elyria residents as extras in the film. It is also home to a yearly charity event: The Elyria Superhero Weekend where local businesses hosted by Atlas Cinema Midway Mall 8, Keith's Comics, Super Heroes To Kids In Ohio and the Mayor's Office participate in a city-wide free event for local and Cleveland area residents which was started in 2012. The event promotes literacy through comic books, community unity and works to help children suffering from illness. The event is centered on whichever super hero comic book film comes out the same weekend as Free Comic Book Day and is split between a number of days during that period. The first day being at Altas cinema, the 2nd in Ely Square and at Keith's Comics in downtown Elyria. The Elyria Public Library, Elyria Comic Book Initiative and The Gathering Community Church among many other notable Elyria organizations and businesses have contributed during the growth of the event.

All content from Kiddle encyclopedia articles (including the article images and facts) can be freely used under Attribution-ShareAlike license, unless stated otherwise. Cite this article:
Elyria, Ohio Facts for Kids. Kiddle Encyclopedia.