Kids Encyclopedia Facts
Not to be confused with Huron, Ohio.

Huron County was named in honor of the Huron Indians (Wyandot), an Iroquoian-speaking tribe who occupied large areas in the Great Lakes region. The word "Huron" may be French, although this origin is disputed.

In the late 18th century this area was in the US Northwest Territory, part of the Connecticut Western Reserve in a sub-region called the Firelands. Connecticut had originally claimed the land as part of its original colony, then afterward wanted to use it to grant to veterans as payment for their service in the war. In 1795 the land was purchased for resale and development by the Connecticut Land Company, but was later under the sole administration of the "Fire Land Company".

At its formation, Huron County consisted of all the Firelands. However, as the population increased in the region, the sections in the northern areas of the county were divided and assigned to the newly organized Erie and Ottawa counties, and a township in the southern section became part of the newly established Ashland County. 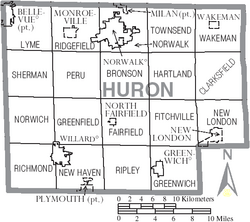 Map of Huron County, Ohio with Municipal and Township Labels

All content from Kiddle encyclopedia articles (including the article images and facts) can be freely used under Attribution-ShareAlike license, unless stated otherwise. Cite this article:
Huron County, Ohio Facts for Kids. Kiddle Encyclopedia.