Sandusky County is a county located in the northwestern part of the U.S. state of Ohio. It is southeast of the Toledo Metropolitan Area. As of the 2020 census, the population was 58,896. Its county seat is Fremont. The county was formed on February 12, 1820, from portions of Huron County. The name is derived from the Wyandot word meaning "water" (Wyandot: saandusteecode: wya is deprecated ). The Sandusky River runs diagonally northeast through the county to its mouth on Sandusky Bay. The bay opens into Lake Erie. 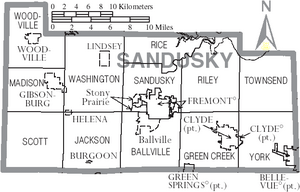 Map of Sandusky County, Ohio with municipal and township labels

All content from Kiddle encyclopedia articles (including the article images and facts) can be freely used under Attribution-ShareAlike license, unless stated otherwise. Cite this article:
Sandusky County, Ohio Facts for Kids. Kiddle Encyclopedia.