Wood County is a county located in the U.S. state of Ohio. As of the 2020 census, the population was 132,248. Its county seat is Bowling Green. The county was named for Captain Eleazer D. Wood, the engineer for General William Henry Harrison's army, who built Fort Meigs in the War of 1812.

Wood County is part of the Toledo, OH Metropolitan Statistical Area. Its diagonal northwest border is formed by the Maumee River, which has its mouth at Maumee Bay on Lake Erie.

The Wood County District Public Library serves the county from its administrative offices in Bowling Green and a branch in Walbridge. In 2006, the library loaned 547,422 items and provided 1,121 programs to its patrons. Total holdings in 2006 were nearly 155,000 volumes with over 250 periodical subscriptions. 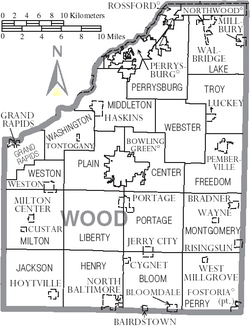 Map of Wood County, Ohio with municipal and township labels

According to the 2019 Wood County Comprehensive annual report, these were the largest employers in the county.

All content from Kiddle encyclopedia articles (including the article images and facts) can be freely used under Attribution-ShareAlike license, unless stated otherwise. Cite this article:
Wood County, Ohio Facts for Kids. Kiddle Encyclopedia.