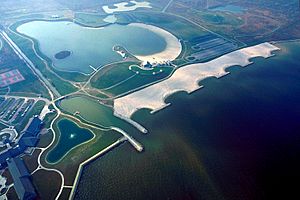 Maumee Bay on Lake Erie is located in the U.S. state of Ohio, just east of the city of Toledo. The bay and the surrounding wetlands form most of the Maumee River basin, and in 1975 part of the area was incorporated into Maumee Bay State Park. The park is not huge, covering 1,450 acres (5.9 km2), but its wetlands feature some of the best bird watching in the United States. The Maumee Bay area is a popular vacation spot in the Midwest, featuring several resorts and a golf course.

All content from Kiddle encyclopedia articles (including the article images and facts) can be freely used under Attribution-ShareAlike license, unless stated otherwise. Cite this article:
Maumee Bay Facts for Kids. Kiddle Encyclopedia.