Perrysburg is a city located in Wood County, Ohio, United States, along the south side of the Maumee River. The population was 25,041 at the 2020 census. Part of the Toledo metropolitan area, the city is 12 miles (19 km) southwest of Toledo. Perrysburg is the second largest city in Wood County, after the county seat of Bowling Green. 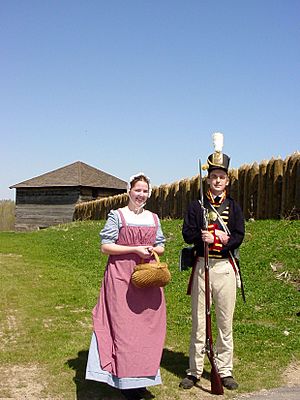 Perrysburg lies near the center of the Twelve Mile Square Reservation, a tract of land ceded by the Odawa people to the United States of America by the Treaty of Greenville in 1795 following the end of the Northwest Indian Wars. They had occupied this territory since the turn of the 18th century, after having settled in the region of the French trading post at Fort Detroit. The Odawa had controlled much of the territory along the Maumee River in present-day northwestern Ohio.

In 1810, early European-American settlers here were Major Amos Spafford (1753-1818), his wife Olive (1756-1823), and their four children. In 1796, Spafford, a native of Connecticut, was a surveyor for the Connecticut Land Company. He drew the first map laying out Cleveland and named the city. He left there in 1810 following appointment as custom's collector and postmaster for the new port at the foot of the rapids of the Maumee River, Port Miami of Lake Erie. Spafford was granted a 160-acre land patent on River Tract #64 in Waynesfield township, signed by President James Monroe. Two years later, 67 families lived in the area, but most fled at the outbreak of the War of 1812. After the war and the 1817 Treaty of Fort Meigs, which extinguished Odawa claim to this area, Spafford purchased the land.

When the war clouds of 1812 began to creep upon Northwest Ohio, General William Henry Harrison ordered the construction of the fort, beginning in February 1813. Harrison was General Anthony Wayne's former aide-de-camp. Later he was elected as the country's ninth president. The installation was named Fort Meigs in honor of Ohio's fourth governor, Return Jonathan Meigs. Fort Meigs was constructed on a bluff above the Maumee River, and built from a design by the army engineer Captain Eleazer D. Wood, for whom the county would be named. Two critical battles with the British were fought at the fort during the War of 1812.

Early settlers in the area fled to Huron during the War of 1812. They returned to settle in the floodplain below Fort Meigs, calling the settlement Orleans. They moved to higher ground after being flooded out. Perrysburg was located by a surveying team led by Alexander Bourne, appointed to that position by Edward Tiffin, Surveyor General of the United States. Contrary to numerous Internet postings, Charles Pierre L'Enfant did NOT survey and plat Perrysburg, Ohio on April 27, 1816; this survey was performed in late June / early July, 1816 by surveyors Joseph Wampler and William Brookfield under the auspices of Alexander Bourne and Josiah Meigs, Surveyor General of Ohio, Michigan, Indiana, Illinois and Missouri.

The town soon became a center for shipbuilding and commerce on Lake Erie. It was named after Commodore Oliver Hazard Perry, naval commander during the War of 1812.

In 1854, an epidemic of cholera decimated the population. The town closed down for two months in that summer, trying to contain the epidemic at a time when people did not understand how it was transmitted. More than 100 people died. Other towns along the Maumee also suffered high losses from the epidemic, and Providence, Ohio was abandoned. It has suffered a disastrous fire less than a decade before.

There were 8,246 households, of which 34.7% had children under the age of 18 living with them, 56.5% were married couples living together, 7.3% had a female householder with no husband present, 2.9% had a male householder with no wife present, and 33.3% were non-families. 28.3% of all households were made up of individuals, and 11% had someone living alone who was 65 years of age or older. The average household size was 2.48 and the average family size was 3.10. 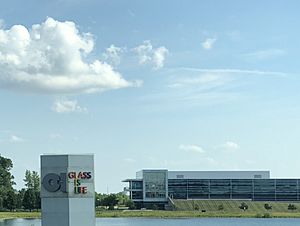 All content from Kiddle encyclopedia articles (including the article images and facts) can be freely used under Attribution-ShareAlike license, unless stated otherwise. Cite this article:
Perrysburg, Ohio Facts for Kids. Kiddle Encyclopedia.