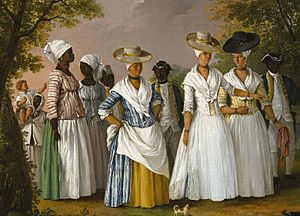 Free Women of Color with their Children and Servants, oil painting by Agostino Brunias, Dominica, c. 1764–1796.

In the context of the history of slavery in the Americas, free people of color (French: gens de couleur libres; Spanish: gente de color libre) were people of mixed African, European, and sometimes Native American descent who were not enslaved. They were a distinct group of free people of color in the French colonies, including Louisiana (New France) and in settlements on Caribbean islands, such as Saint-Domingue (Haiti), St. Lucia, Dominica, Guadeloupe, and Martinique. In these territories and major cities, particularly New Orleans, and those cities held by the Spanish, a substantial third class of primarily mixed-race, free people developed. These colonial societies classified mixed-race people in a variety of ways, generally related to visible features and to the proportion of African ancestry. Racial classifications were numerous in Latin America.

In the Thirteen Colonies (which later became the United States) the term free negro was often used to cover the same class of people – those who were legally free and visibly of ethnic African descent. Many were people of mixed race, freed because of relation to their master or other whites.

All content from Kiddle encyclopedia articles (including the article images and facts) can be freely used under Attribution-ShareAlike license, unless stated otherwise. Cite this article:
Free people of color Facts for Kids. Kiddle Encyclopedia.