Saint-Domingue was a French colony on the Caribbean island of Hispaniola from 1659 to 1804, in what is now Haiti.

In 1791, the slaves and some free people of color of Saint-Domingue began waging a rebellion against French authority. The rebels became reconciled to French rule following the abolition of slavery in the colony in 1793, although this alienated the island's dominant slave-holding class. France controlled the entirety of Hispaniola from 1795 to 1802, when a renewed rebellion began. The last French troops withdrew from the western portion of the island in late 1803, and the colony later declared its independence as Haiti, its indigenous name, the following year. 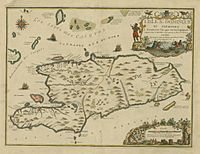 Spain controlled the entire island of Hispaniola from the 1490s until the 17th century, when French pirates began establishing bases on the western side of the island. The official name was La Española, meaning "The Spanish (Island)". It was also called Santo Domingo or San Domingo, after Saint Dominic.

The western part of Hispaniola was neglected by the Spanish authorities, and French buccaneers began to settle first on the Tortuga Island, then on the northwest of the island: they called it le Grande Terre. Spain later ceded the entire western coast of the island to France, retaining the rest of the island, including the Guava Valley, today known as the Central Plateau.

The French called their portion of Hispaniola Saint-Domingue, the French equivalent of Santo Domingo. The Spanish colony on Hispaniola remained separate, and eventually became the Dominican Republic, the capital of which is still named Santo Domingo.

All content from Kiddle encyclopedia articles (including the article images and facts) can be freely used under Attribution-ShareAlike license, unless stated otherwise. Cite this article:
Saint-Domingue Facts for Kids. Kiddle Encyclopedia.