Coat of arms of Haiti facts for kids 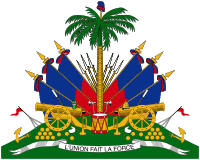 The first coat of arms of Haiti was created in 1807, and has appeared in its current form since 1986.

It has a palm, with several flags at its sides, and two cannons on a green lawn. On the lawn there are several objects, such as musical instruments (a snare drum and bugles), guns, and ship anchors. Above the palm tree, there is a Phrygian cap placed as a symbol of freedom.

All content from Kiddle encyclopedia articles (including the article images and facts) can be freely used under Attribution-ShareAlike license, unless stated otherwise. Cite this article:
Coat of arms of Haiti Facts for Kids. Kiddle Encyclopedia.