Template:Drum kit components A snare drum or side drum is a percussion instrument that produces a sharp staccato sound when the head is struck with a drum stick, due to the use of a series of stiff wires held under tension against the lower skin. Snare drums are often used in orchestras, concert bands, marching bands, parades, drumlines, drum corps, and more. It is one of the central pieces in a drum set, a collection of percussion instruments designed to be played by a seated drummer and used in many genres of music.

Snare drums are usually played with drum sticks, but other beaters such as the brush or the rute can be used to achieve different tones. The snare drum is a versatile and expressive percussion instrument due to its sensitivity and responsiveness. The sensitivity of the snare drum allows it to respond audibly to the softest strokes, even with a wire brush; as well, it can be used for complex rhythmic patterns and engaging solos at moderate volumes. Its high dynamic range allows the player to produce powerful accents with vigorous strokes and a thundering crack (120+ dB) when rimshot strokes are used.

The snare drum originates from the tabor, a drum first used to accompany the flute. The tabor evolved into more modern versions, such as the kit snare, marching snare, tarol snare, and piccolo snare. Each type presents a different style of percussion and size. The snare drum that one might see in a popular music concert is usually used in a backbeat style to create rhythm. In marching bands, it can do the same but is used mostly for a front beat. In comparison with the marching snare, the kit snare is generally smaller in length, while the piccolo is the smallest of the three. The snare drum is easily recognizable by its loud cracking sound when struck firmly with a drumstick or mallet. The depth of the sound varies from snare to snare because of the different techniques and construction qualities of the drum. Some of these qualities are head material and tension, dimensions, and rim and drum shell materials and construction.

The snare drum is constructed of two heads—both usually made of plastic—along with a rattle of metal wires on the bottom head called the snares. The wires can also be placed on the top, as in the tarol snare, or both heads as in the case of the Highland snare drum. The top head is typically called the batter head because that is where the drummer strikes it, while the bottom head is called the snare head because that is where the snares are located. The tension of each head is held constant by tension rods. Tension rod adjustment allows the pitch and tonal character of the drum to be customized by the player. The strainer is a lever that engages or disengages contact between the snares and the head, and allows snare tension adjustment. If the strainer is disengaged, the sound of the drum resembles a tom because the snares are inactive. The rim is the metal ring around the batter head, which can be used for a variety of things, although it is notably used to sound a piercing rimshot with the drumstick. 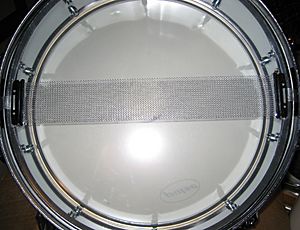 Snares on a drum 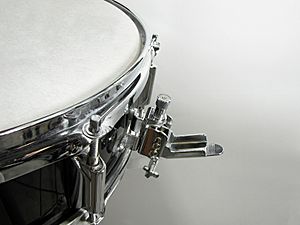 The drum can be played by striking it with a drum stick or any other form of beater, including brushes, rute and hands, all of which produce a softer-sounding vibration from the snare wires. When using a stick, the drummer may strike the head of the drum, the rim (counterhoop), or the shell. When the top head is struck, the bottom (resonant) head vibrates in tandem, which in turn stimulates the snares and produces a cracking sound. The snares can be thrown off (disengaged) with a lever on the strainer so that the drum produces a sound reminiscent of a tom-tom. Rimshots are a technique associated with snare drums in which the head and rim are struck simultaneously with one stick (or in orchestral concert playing, a stick placed on the head and the rim struck by the opposite stick). In contemporary and/or pop and rock music, where the snare drum is used as a part of a drum kit, many of the backbeats and accented notes on the snare drum are played as rimshots, due to the ever-increasing demand for their typical sharp and high-volume sound.

A commonly used alternative way to play the snare drum is known as "cross-stick" or "side-stick". This is done by holding the tip of the drumstick against the drum head and striking the stick's other end (the butt) against the rim, using the hand to mute the head. This produces a dry high-pitched click, similar to a set of claves, and is especially common in Latin and jazz music. So-called "ghost notes" are very light "filler notes" played in between the backbeats in genres such as funk and rhythm and blues. The iconic drum roll is produced by alternately bouncing the sticks on the drum head, striving for a controlled rebound. A similar effect can be obtained by playing alternating double strokes on the drum, creating a double stroke roll, or very fast single strokes, creating a single stroke roll. The snares are a fundamental ingredient in the pressed (buzz) drum roll, as they help to blend together distinct strokes that are then perceived as a single, sustained sound. The snare drum is the first instrument to learn in preparing to play a full drum kit. Rudiments are sets of basic patterns often played on a snare drum.

Snare drums may be made from various wood, metal, acrylic, or composite, e.g., fiberglass materials. A typical diameter for snare drums is 14 in (36 cm). Marching snare drums are deeper (taller) in size than snare drums normally used for orchestral or drum kit purposes, often measuring 12 in deep (tall). Orchestral and drum kit snare drum shells are about 6 in (15 cm) deep. Piccolo snare drums are even shallower at about 3 in (7.6 cm) deep. Soprano, popcorn, and firecracker snare drums have diameters as small as 8 in (20 cm) and are often used for higher-pitched special effects.

The heads or skins used are a batter head (the playing surface on the top of the drum) and a resonant (bottom) head. The resonant head is usually much thinner than the batter head and is not beaten while playing. Rather than calfskin, most modern drums use plastic (Mylar) skins of around 10 mils thickness, sometimes with multiple plies (usually two) of around 7 mils for the batter head. In addition, tone control rings or dots can be applied, either on the outer or inner surface of the head, to control overtones and ringing, and can be found positioned in the centre or close to the edge hoops or both. Resonant heads are usually only a few mils thick, to enable them to respond to the movement of the batter head as it is played. Pipe band requirements have led to the development of a Kevlar-based head, enabling very high tuning, thus producing a very high-pitched cracking snare sound.

A new technique used to improve the sound quality during snare drum construction is symmetrical venting. In contrast to a standard single vent hole, air can easily travel through and around the instrument without getting caught. This rapid movement creates a smoother, stronger sound.

All content from Kiddle encyclopedia articles (including the article images and facts) can be freely used under Attribution-ShareAlike license, unless stated otherwise. Cite this article:
Snare drum Facts for Kids. Kiddle Encyclopedia.