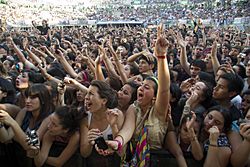 Fans at a recital in Buenos Aires, Argentina

Fanatic is a word which means someone who loves a thing, or a person, or an idea more than anything else. It is used to talk about people who care a lot about politics, religion or their own group of people. Some fanatics can hurt other people whom they dislike, or who disagree with them.

A short form of the word, Fan, means a person who loves a hobby, a sport (often a team), music, a kind of movie or book, or almost anything. These people mostly do not try to hurt people. This word is used in American English. There are lots of kinds of fans, including science fiction fans and fans of popular music stars, like The Beatles. Fans will meet with each other to talk about and share their interest, often in large groups called conventions.

In British English, supporter is their word for a person who likes and supports a sportsperson or a team. Many teams of some sports have thousands of supporters, for example, the football team Real Madrid.

In American English, supporter is more often used to talk about people in politics. Supporters of a politician, a political party, or an idea such as a particular law may like their subject very much, but usually are not violent.

All content from Kiddle encyclopedia articles (including the article images and facts) can be freely used under Attribution-ShareAlike license, unless stated otherwise. Cite this article:
Fanatic Facts for Kids. Kiddle Encyclopedia.