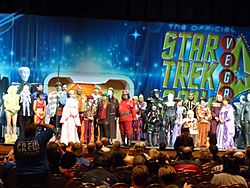 A convention, in the sense of a meeting, is a gathering of individuals who meet at an arranged place and time in order to discuss or engage in some common interest. The most common conventions are based upon industry, profession, and fandom. Trade conventions typically focus on a particular industry or industry segment, and feature keynote speakers, vendor displays, and other information and activities of interest to the event organizers and attendees.

Conventions are often planned and coordinated, often in exacting detail, by professional meeting and convention planners, either by staff of the convention's hosting company or by outside specialists. Most large cities will have a convention center dedicated to hosting such events. The term MICE—meetings Incentives Conventions and Exhibitions—is widely used in Asia as a description of the industry. The Convention ("C") is one of the most dynamic elements in the M.I.C.E. segment. The industry is generally regulated under the tourism sector.

In the technical sense, a convention is a meeting of delegates or representatives. The 1947 Newfoundland National Convention is a classic example of a state-sponsored political convention. More often, organizations made up of smaller units, chapters, or lodges, such as labor unions, honorary societies, and fraternities and sororities, meet as a whole in convention by sending delegates of the units to deliberate on the organization's common issues. This also applies to a political convention, though in modern times the common issues are limited to selecting a party candidate or party chairman. In this technical sense, a congress, when it consists of representatives, is a convention.

The British House of Commons is a convention, as are most other houses of a modern representative legislature. The National Convention or just "Convention" in France comprised the constitutional and legislative assembly which sat from September 20, 1792 to October 26, 1795. The governing bodies of religious groups may also be called conventions, such as the General Convention of the Episcopal Church USA and the Southern Baptist Convention.

Con is a common abbreviation for convention, and some conventions (such as DEF CON and Gen Con) use it in their names.

All content from Kiddle encyclopedia articles (including the article images and facts) can be freely used under Attribution-ShareAlike license, unless stated otherwise. Cite this article:
Convention (meeting) Facts for Kids. Kiddle Encyclopedia.