Fraternities and sororities facts for kids 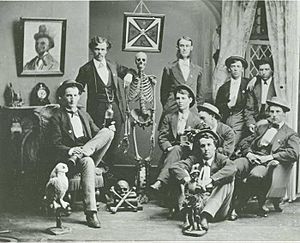 Members of Phi Kappa Sigma at Washington & Jefferson College in 1872

Fraternities and sororities are social groups for college students, though sometimes high schools have them too. They exist mostly in the United States and Europe. The words frater and soror are Latin for "brother" and "sister" and used to show closeness between members. They also denote whether the group is for men or women. Sororities are only for women. Fraternities are primarily for men, but less often, a fraternity can be for both men and women.

Fraternities and sororities often have groups at many different schools. Each fraternity or sorority is given two or three Greek letters to call themselves, for example, ΑΦ (Alpha Phi) or ΑΧΩ (Alpha Chi Omega). To tell the difference between groups at different schools, called chapters, each chapter is given another set of Greek letters. For example, a man in the Kappa Sigma fraternity who goes to the University of Louisiana at Lafayette is part of the fraternity's EX (Epsilon Chi) chapter. Chapters sometimes have houses on or near the campus of the college the members attend that members can live in.

University students line up to rush a sorority.

Fraternities and sororities are often exclusive, meaning people who want to join need to be invited to do so. This is done during a process called "rushing". During a rush, people who want to join a chapter will talk to current members. If the member think the person rushing is a good fit for the group, they will get an invitation, called a "bid", to join the chapter. If the person rushing accepts, they become a "pledge".

The pledging period is a time when the pledge is not yet a full member, and may leave or be refused membership at any time. Sometimes, members of the chapter will put the pledge through trials. Sometimes they are tests on the history of the fraternity they are trying to join, wearing a badge with the fraternity's letters on it at all times, or performing public service. Sometimes the trials are cruel, dangerous or humiliating. If the trials are cruel, it is called "hazing". Hazing is illegal in 44 states.

After the pledging period, the pledge becomes a full member of the chapter and fraternity or sorority.

All content from Kiddle encyclopedia articles (including the article images and facts) can be freely used under Attribution-ShareAlike license, unless stated otherwise. Cite this article:
Fraternities and sororities Facts for Kids. Kiddle Encyclopedia.