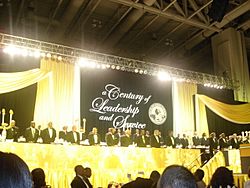 Alpha Phi Alpha Board members at Marriott Wardman Park in Washington, DC. for the centennial banquet

Alpha Phi Alpha is the first Black, inter-collegiate Greek-lettered fraternity in the United States. It was founded on December 4, 1906 at Cornell University in Ithaca, New York. It uses an icon from ancient Egypt, the Great Sphinx of Giza, as its symbol. Its aims are "manly deeds, scholarship, and love for all mankind." Its motto is First of All, Servants of All, We Shall Transcend All. Its archives are preserved at the Moorland-Spingarn Research Center. Chapters were chartered at Howard University and Virginia Union University in 1907. The fraternity has over 290,000 members. Since 1940 it has been open to men of all races. Currently, there are more than 730 active chapters worldwide.

All content from Kiddle encyclopedia articles (including the article images and facts) can be freely used under Attribution-ShareAlike license, unless stated otherwise. Cite this article:
Alpha Phi Alpha Facts for Kids. Kiddle Encyclopedia.