The Martin Luther King, Jr. Memorial is located in West Potomac Park next to the National Mall in Washington, D.C., United States. It covers four acres (1.6 ha) and includes the Stone of Hope, a granite statue of Civil Rights Movement leader Martin Luther King Jr. carved by sculptor Lei Yixin. The inspiration for the memorial design is a line from King's "I Have A Dream" speech: "Out of the mountain of despair, a stone of hope." The memorial opened to the public on August 22, 2011, after more than two decades of planning, fund-raising, and construction.

This national memorial is the 395th unit in the United States National Park Service. The monumental memorial is located at the northwest corner of the Tidal Basin near the Franklin Delano Roosevelt Memorial, on a sightline linking the Lincoln Memorial to the northwest and the Jefferson Memorial to the southeast. The official address of the monument, 1964 Independence Avenue, S.W., commemorates the Civil Rights Act of 1964.

A ceremony dedicating the memorial was scheduled for Sunday, August 28, 2011, the 48th anniversary of the "I Have a Dream" speech that Martin Luther King Jr. delivered from the steps of the Lincoln Memorial in 1963 but was postponed until October 16 (the 16th anniversary of the 1995 Million Man March on the National Mall) due to Hurricane Irene. 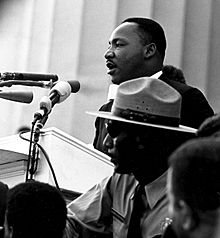 Delivering the "I Have a Dream" speech at the 1963 Washington, D.C. Civil Rights March.

The street address for the memorial is 1964 Independence Avenue SW in Washington, D.C. The address "1964" was chosen as a direct reference to the 1964 Civil Rights Act, a milestone in the Civil Rights Movement in which King played an important role. The memorial is located on a 4-acre (1.6 ha) site in West Potomac Park that borders the Tidal Basin, southwest of the National Mall. The memorial is near the Franklin Delano Roosevelt Memorial and is intended to create a visual "line of leadership" from the Lincoln Memorial, on whose steps King gave his "I Have a Dream" speech at the March on Washington, to the Jefferson Memorial. 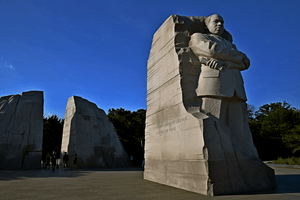 The centerpiece for the memorial is based on a line from King's "I Have A Dream" speech: "Out of the mountain of despair, a stone of hope." A 30-foot (9.1 m)-high relief of King named the Stone of Hope stands past two other pieces of granite that symbolize the "mountain of despair." Pale pink granite was used to create the Stone of Hope to ensure that the carving's details would be visible at night, and to contrast with the Mountain of Despair. Visitors figuratively "pass through" the Mountain of Despair on the way to the Stone of Hope, symbolically "moving through the struggle as Dr. King did during his life."

A 450 feet (140 m)-long inscription wall includes excerpts from many of King's sermons and speeches. On this crescent-shaped granite wall, fourteen of King's quotes are inscribed, the earliest from the time of the 1955 Montgomery bus boycott in Alabama, and the latest from his final sermon, delivered in 1968 at Washington, D.C.'s National Cathedral, just four days before his assassination.

The relief of King is intended to give the impression that he is looking over the Tidal Basin toward the horizon, and that the cherry trees that adorn the site will bloom every year during the anniversary of King's death.

This memorial is not the first in Washington, D.C., to honor an African American, as it was preceded by a memorial to Mary McLeod Bethune, founder of the National Council of Negro Women, who also served as an unofficial advisor to President Franklin D. Roosevelt. A 17 feet (5.2 m)-tall bronze statue of her is located in Lincoln Park, East Capitol St. and 12th St., NE. The King Memorial is the first memorial to an African American on or near the National Mall.

The memorial is not the first to honor a non-United States president on or near the National Mall, as it was preceded by three other such memorials: the John Paul Jones Memorial, erected in 1912 near the Tidal Basin in memory of John Paul Jones, the Scottish-born American naval hero who served during the American Revolution; the John Ericsson Memorial, authorized in 1916 to honor John Ericsson, the Swedish-born engineer and inventor who designed the USS Monitor during the Civil War; and the George Mason Memorial, authorized in 1990 to honor George Mason, author of the Virginia Declaration of Rights (the basis for the U.S. Constitution's Bill of Rights), near the Thomas Jefferson Memorial. 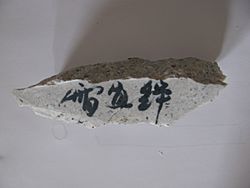 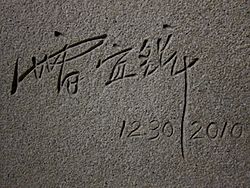 Fourteen quotes from King's speeches, sermons, and writings are inscribed on the Inscription Wall. The "Council of Historians" created to choose the quotations included Maya Angelou, Lerone Bennett, Clayborne Carson, Henry Louis Gates, Marianne Williamson and others, though the memorial's executive architect stated that Maya Angelou did not attend the meetings at which the quotations were selected. According to the official National Park Service brochure for the Memorial, the inscriptions that were chosen "stress four primary messages of Dr. King: justice, democracy, hope, and love."

The earliest quote is from 1955, spoken during the time of the Montgomery bus boycott, and the latest is from a sermon King delivered at the National Cathedral in Washington, D.C., four days before he was assassinated. The quotes are not arranged in chronological order, so that no visitor must follow a set path to follow the quotations, instead being able to start reading at any point he or she might choose. Because the main theme of the Memorial is linked to King's famous "I Have a Dream" speech, none of the quotations on the Inscription Wall come from that speech.

The selection of quotes was announced at a special event at the National Building Museum on February 9, 2007 (at the same time the identity of the sculptor was revealed). The fourteen quotes on the Inscription Wall are:

Some of King's words reflected in these quotations are based on other sources, including the Bible, and in one case – "the arc of the moral universe" quote – paraphrases the words of Theodore Parker, an abolitionist and Unitarian minister, who died shortly before the beginning of the Civil War.

Inscriptions on the Stone of Hope

All content from Kiddle encyclopedia articles (including the article images and facts) can be freely used under Attribution-ShareAlike license, unless stated otherwise. Cite this article:
Martin Luther King Jr. Memorial Facts for Kids. Kiddle Encyclopedia.