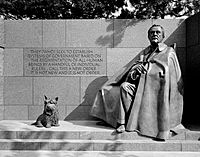 A statue of President Franklin D. Roosevelt and his dog Fala

"I Hate War", a quote said by President Roosevelt is engraved on a rock at the memorial

It was dedicated on May 2, 1997 by President Bill Clinton. The monument, spread over 7.5 acres (3.0 ha) near the southwest side of the Tidal Basin along the Cherry Tree Walk in West Potomac Park.

The memorial honors the 12 years of the history of the United States through four outdoor rooms, one for each of FDR's terms of office.

All content from Kiddle encyclopedia articles (including the article images and facts) can be freely used under Attribution-ShareAlike license, unless stated otherwise. Cite this article:
Franklin Delano Roosevelt Memorial Facts for Kids. Kiddle Encyclopedia.