March on Washington for Jobs and Freedom facts for kids 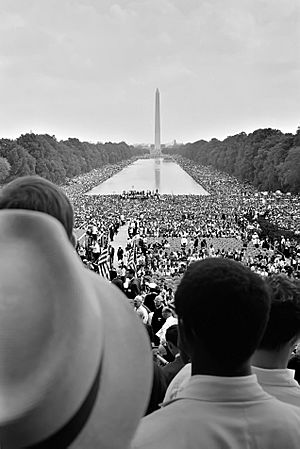 March on Washington for Jobs and Freedom, from the steps of the Lincoln Memorial.

The March on Washington for Jobs and Freedom was a rally held on the National Mall in Washington, D.C. on 28 August 1963. It was where Martin Luther King, Jr gave his famous I Have a Dream speech. After the march, the Civil Rights Act of 1964 and the National Voting Rights Act of 1965 were passed. There were over 200,000 people there, both black and white.

The march was first planned by A. Philip Randolph, who was the president of the Negro American Labor Council, and vice president of the AFL-CIO. He had planned another civil rights march in 1941, but it never happened. However, the threat of the march was a big reason why President Roosevelt wrote Executive Order 8802. This forced equal opportunity in the defense industry, which meant that all workers had to be treated the same, no matter what their race was.

Other leaders of civil rights movement helped Randolph plan the march and spread the word to their members. Some of the most important were James Farmer, (president of the Congress of Racial Equality), John Lewis (president of the Student Nonviolent Coordinating Committee), Martin Luther King, Jr. (president of the Southern Christian Leadership Conference), Roy Wilkins (president of the NAACP), and Whitney Young (president of the National Urban League). Bayard Rustin, the first of the Freedom Riders who tried to challenge racial discrimination in travel, worked on the details of the march.

Many people were worried for the marchers' safety. Black nationalist leader Malcolm X sent an open telegram to George Lincoln Rockwell, the leader of the Nazi Party in the United States. Malcolm wrote:

The Washington DC Police department looked for black police officers from around the country to protect King during the march and speeches. They thought the presence of black officers would be more calming if trouble broke out.

All content from Kiddle encyclopedia articles (including the article images and facts) can be freely used under Attribution-ShareAlike license, unless stated otherwise. Cite this article:
March on Washington for Jobs and Freedom Facts for Kids. Kiddle Encyclopedia.