Sir Sidney Poitier, KBE ( born February 20, 1927) is a Bahamian-American actor and film director. He received two nominations for the Academy Award for Best Actor, winning one, the first black actor to win that award. He was also nominated six times for each of the Golden Globe for Best Actor and the British Academy of Film and Television Arts Award (BAFTA) for Best Foreign Actor, winning each once. From 1997 to 2007, he served as the Bahamian Ambassador to Japan.

His family lived in the Bahamas but Poitier was born in Miami while they were visiting, thereby acquiring American citizenship. He grew up in the Bahamas, moving to New York when he was 16. He joined the North American Negro Theatre landing his breakthrough film role in 1950 as an incorrigible high school student in Blackboard Jungle (1955).

In 1958 Poitier starred with Tony Curtis in the critically acclaimed The Defiant Ones as chained-together convicts who escape and must cooperate. Each received a nomination for the Academy Award for Best Actor, with Poitier's being the first for a black actor, as well as nominations for the BAFTAs, which Poitier won. In 1964 he won the Academy Award for Best Actor and the Golden Globe Award for Best Actor for his role in Lilies of the Field (1963) in which he played a handyman who stays with and helps a group of German-speaking nuns build a chapel. Poitier also received critical acclaim for A Raisin in the Sun (1961) and A Patch of Blue (1965).

He continued to break ground in three successful 1967 films, each dealing with issues of race and race relations: To Sir, with Love; Guess Who's Coming to Dinner, and In the Heat of the Night, making him the top box-office star of that year. He received nominations for the Golden Globes and BAFTAs for the latter film, but not for the Oscars, likely due to vote splitting between his roles. After twice reprising his Virgil Tibbs character from In the Heat of the Night and acting in a variety of other films, including the thriller The Wilby Conspiracy (1975), with Michael Caine, Poiter turned to acting/directing with the action-comedies Uptown Saturday Night (1974), Let's Do It Again (1975), and A Piece of the Action (1978), all co-starring Bill Cosby. During a decade away from acting he directed the successful Stir Crazy (1980) starring Richard Pryor and Gene Wilder, among other films. He returned to acting in the late 1980s and early 1990s in a few thrillers and television roles.

Poitier was knighted by Queen Elizabeth II in 1974. In 2009 Poitier was awarded the Presidential Medal of Freedom, the United States' highest civilian honor. In 2016, he was awarded the BAFTA Fellowship for outstanding lifetime achievement in film. In 1999, the American Film Institute ranked Poitier 22nd on their list of Greatest Male Stars of classic Hollywood cinema. In 2002 Poitier was chosen to receive an Academy Honorary Award, in recognition of his "remarkable accomplishments as an artist and as a human being".

Poitier was born in Miami, Florida. He grew up with his family on remote Cat Island, in the Bahamas. His mother was called Evelyn and his father was called Reginald James Poitier. They had a farm. Poitier's birth was premature and people did not expect him to survive, but his parents stayed three months in Miami until he became well. Since he was born in Miami, Poitier automatically gained U.S. citizenship.

When he was 15, Poitier's parents sent him off Miami to live with his older brother. At 17, he moved to New York City and got several menial jobs. During this time, he was arrested for vagrancy (being homeless) after having to leave his home for not paying rent. He decided to join the United States Army. He worked as a dishwasher until he got a job with the American Negro Theater. 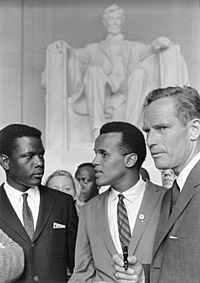 Poitier, Harry Belafonte, and Charlton Heston at the March on Washington, 1963

Poitier was tone deaf, and could not sing or dance. This is what black actors did at the time, so audiences did not like him. He worked very hard to improve his acting skills, and to get rid of his Bahamian accent. He eventually got a leading role in the Broadway play called Lysistrata and he got excellent reviews. At the end of 1949, he got a job working for Darryl F. Zanuck in the movie No Way Out (1950). He played a doctor treating a white bigot. After this job, he soon got more movie roles. The acting jobs he got were better and more interesting than the roles most black actors played at the time.

In 1955, he played a member of an badly behaved high school class in Blackboard Jungle. This was an important role in Poitier's career.

Poitier was the first black actor to win the Academy Award for Best Actor (for Lilies of the Field in 1963).

He acted in the first production of A Raisin in the Sun on Broadway in 1959, and later starred in the movie version released in 1961. He was also in The Bedford Incident (1965), and A Patch of Blue (1965) co-starring Elizabeth Hartman and Shelley Winters. In 1967, he was the most successful actor at the box office, with three successful movies, Guess Who's Coming to Dinner; To Sir, with Love and In the Heat of the Night. The last movie featured his most successful character, Virgil Tibbs, a Philadelphia, Pennsylvania detective.

However, Poitier began to be criticized for typecasting himself, playing black characters who had only good personalities, like his character in Guess Who's Coming To Dinner. Poitier agreed with this but although he wanted more different roles, but also wanted to set a good example with his characters and go against the negative stereotypes that had come before. He was the only major black actor in the American movie industry at the time.

Poitier has directed several movies, the most successful being the Richard Pryor-Gene Wilder comedy Stir Crazy. The first movie he directed was the western Buck and the Preacher. He was also the star, with Harry Belafonte. Other movies he has directed are Uptown Saturday Night, Let's Do It Again, A Piece of the Action, and Ghost Dad.

Poitier, Mary Robinson, and Desmond Tutu about to receive the Presidential Medal of Freedom, 2009

Poitier was first married to Juanita Hardy from April 29, 1950 until 1965. He has been married to Joanna Shimkus, a Canadian-born actress, since January 23, 1976. He has four daughters by his first marriage and two by his second.

He has written three autobiographical books, This Life (1980), The Measure of a Man: A Spiritual Autobiography (2000) and Life Beyond Measure - letters to my Great-Granddaughter (2008).

In 2001, Poitier received an Academy Honorary Award for his overall contribution to American cinema. In August 2009, he received the Medal of Freedom from President Barack Obama.

All content from Kiddle encyclopedia articles (including the article images and facts) can be freely used under Attribution-ShareAlike license, unless stated otherwise. Cite this article:
Sidney Poitier Facts for Kids. Kiddle Encyclopedia.