A supporter of Democratic politicians and civil rights in the 1960s, Heston later became a Republican, founding a conservative political action committee and supporting Ronald Reagan. Heston's most famous role in politics came as the five-term president of the National Rifle Association, from 1998 to 2003. After being diagnosed with Alzheimer's disease in 2003, he retired from both acting and the NRA presidency. Heston died on April 5, 2008, aged 84, from pneumonia.

He was born in Wilmette, Illinois on October 4, 1923. He was raised in St. Helen, Michigan. Heston studied at New Trier High School and at Northwestern University.

Heston was also known for his politics. When he was young he held liberal views and marched with people such as Martin Luther King, Jr. for civil rights in the 1960s.

It was rare for a Hollywood actor to be for such causes at that time. Later in his life, he was for conservative causes such as gun rights. He was president of the National Rifle Association, a group that is for the rights of gun owners, from 1998 to 2003.

In July 2003, he received the Presidential Medal of Freedom at the White House from President George W. Bush. 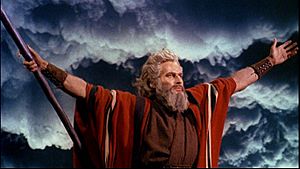 Charlton Heston as Moses in Cecil B. DeMille's The Ten Commandments (1956)

Heston frequently recounted that while growing up in northern Michigan in a sparsely populated area, he often wandered in the forest, "acting" out characters from books he had read. Later, in high school, he enrolled in New Trier's drama program, playing in the amateur silent 16 mm film adaptation of Peer Gynt, from the Ibsen play, by future film activist David Bradley released in 1941.

From 1985-87, he starred in his only prime time stint on a television series in the soap, The Colbys. With his son Fraser, he produced and starred in several TV movies, including remakes of Treasure Island and A Man For All Seasons. In 1992, Heston appeared on the A&E cable network in a short series of videos, Charlton Heston Presents the Bible, reading passages from the King James version.

In 1996, Heston had a hip replacement. He was diagnosed with prostate cancer in 1998. Following a course of radiation treatment, the cancer went into remission. In 2000, he publicly disclosed that he had been treated for alcoholism at a Utah clinic in May–June of that year. 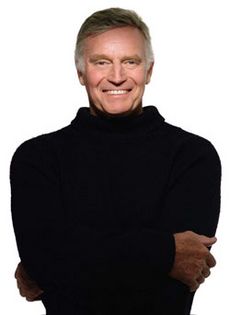 Heston by Jerry Avenaim in 2001

On August 9, 2002, he publicly announced (via a taped message) that he had been diagnosed with symptoms consistent with Alzheimer's disease. In July 2003, in his final public appearance, Heston received the Presidential Medal of Freedom at the White House from President George W. Bush. In March 2005, various newspapers reported that family and friends were shocked by the progression of his illness, and that he was sometimes unable to get out of bed.

Heston died on the morning of April 5, 2008, at his home in Beverly Hills, California, with Lydia, his wife of 64 years, by his side. He was also survived by their son, Fraser Clarke Heston, and adopted daughter, Holly Ann Heston. The cause of death was not disclosed by the family. A month later, media outlets reported his death was due to pneumonia. Heston's family released a statement:

Charlton Heston was seen by the world as larger than life. He was known for his chiselled jaw, broad shoulders and resonating voice, and, of course, for the roles he played. No one could ask for a fuller life than his. No man could have given more to his family, to his profession and to his country. 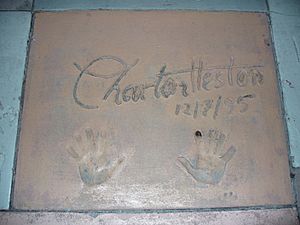 Richard Corliss wrote in Time magazine, "From start to finish, Heston was a grand, ornery anachronism, the sinewy symbol of a time when Hollywood took itself seriously, when heroes came from history books, not comic books. Epics like Ben-Hur or El Cid simply couldn't be made today, in part because popular culture has changed as much as political fashion. But mainly because there's no one remotely like Charlton Heston to infuse the form with his stature, fire, and guts."

In his obituary for the actor, film critic Roger Ebert noted, "Heston made at least three movies that almost everybody eventually sees: Ben-Hur, The Ten Commandments and Planet of the Apes."

Heston's cinematic legacy was the subject of Cinematic Atlas: The Triumphs of Charlton Heston, an 11-film retrospective by the Film Society of the Lincoln Center that was shown at the Walter Reade Theatre from August 29 to September 4, 2008.

On April 17, 2010, Heston was inducted into the National Cowboy and Western Heritage Museum's Hall of Great Western Performers.

In his childhood hometown of St. Helen, Michigan, a charter school, Charlton Heston Academy, opened on September 4, 2012. It is housed in the former St. Helen Elementary School. Enrollment on the first day was 220 students in grades kindergarten through eighth.

Charlton Heston was commemorated on a United States postage stamp issued on April 11, 2014.

Charlton Heston was inducted as a Laureate of the Lincoln Academy of Illinois and awarded the Order of Lincoln (the State’s highest honor) by the Governor of Illinois in 1977 in the area of Performing Arts.

All content from Kiddle encyclopedia articles (including the article images and facts) can be freely used under Attribution-ShareAlike license, unless stated otherwise. Cite this article:
Charlton Heston Facts for Kids. Kiddle Encyclopedia.