Planet of the Apes (movie) facts for kids 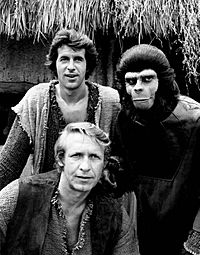 The cast of the Planet of the Apes TV series: James Naughton as Burke, Ron Harper as Virdon, and Roddy McDowall as Galen

Planet of the Apes is an American science fiction movie released in 1968 and directed by Franklin J. Schaffner. It was based on the novel La planète des singes written by Pierre Boulle and released in 1963. The movie stars Charlton Heston and features Roddy McDowall, Kim Hunter, Maurice Evans, James Whitmore, James Daly and Linda Harrison. It was released by 20th Century Fox.

The film's story is about an astronaut crew who leave Earth on a deep space mission and crash land on a supposedly alien planet in the 40th century. Ony three out of the four crew members survive the crash and the survivors find the world to be home to a society of apes; including chimpanzees, gorillas and orangutans. These apes have the intelligence of human beings as well as the ability to speak and walk upright like humans. Humans in this society are treated like slaves and live in the wilderness without the ability to speak. At the end of the movie, one of the crew members finds the Statue of Liberty and realizes they were on Earth all along.

All content from Kiddle encyclopedia articles (including the article images and facts) can be freely used under Attribution-ShareAlike license, unless stated otherwise. Cite this article:
Planet of the Apes (movie) Facts for Kids. Kiddle Encyclopedia.