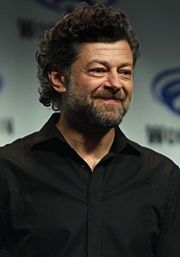 Andrew Clement "Andy" Serkis (born 20 April 1964) is an English movie, television, stage, voice actor, comedian, movie producer, and writer who is known for his roles in The Lord of the Rings movie series, King Kong, Rise of the Planet of the Apes, and in The Adventures of Tintin. He has won two Saturn Award in 2002 and in 2011 and a Screen Actors Guild Award in 2003.

Serkis is set to play Alfred Pennyworth in the DCEU 2021 movie The Batman.

Serkis was born on 20 April 1964 in Ruislip, Middlesex, England. He studied at St Benedict's School, Ealing, Lancaster University, and in The County College. Serkis has been married to Lorraine Ashbourne since 2002. They have three children.

Serkis has won 15 top awards for his portrayal of Gollum and his other work in movies, television and stage acting.

All content from Kiddle encyclopedia articles (including the article images and facts) can be freely used under Attribution-ShareAlike license, unless stated otherwise. Cite this article:
Andy Serkis Facts for Kids. Kiddle Encyclopedia.