King Kong is a giant movie monster, resembling an enormous ape, that has appeared in various media since 1933. The character first appeared in the 1933 film King Kong from RKO Pictures, which received universal acclaim upon its initial release and re-releases. A sequel quickly followed that same year with The Son of Kong, featuring Little Kong.

The most recent film, Kong: Skull Island (2017), set in 1973, is part of Legendary Entertainment's MonsterVerse, which began with Legendary's reboot of Godzilla in 2014. A crossover sequel, Godzilla vs. Kong, once again pitting the characters against one another, is currently planned for 2020.

The character King Kong has become one of the world's most famous movie icons, having inspired a number of sequels, remakes, spin-offs, imitators, parodies, cartoons, books, comics, video games, theme park rides, and a stage play. His role in the different narratives varies, ranging from a rampaging monster to a tragic antihero.

In 1991, the movie was thought "culturally, historically and aesthetically significant" by the Library of Congress and selected for preservation in the National Film Registry. 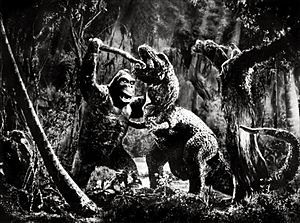 The basic plot of the story is, it is the Great Depression. Ann Darrow is a poor young woman. She agrees to go to a far island to make a movie with director Carl Denham. On the island, Ann is kidnap by natives and is presented as an offering to a giant gorilla called Kong. He falls in love with her and takes her to his secret place in the jungle. She is rescued by Denham and the ship's crew. Kong is captured and taken to New York City to be put on display. He escapes. He captures Ann and carries her to the top of the Empire State Building. He is shot down by army planes.

All content from Kiddle encyclopedia articles (including the article images and facts) can be freely used under Attribution-ShareAlike license, unless stated otherwise. Cite this article:
King Kong Facts for Kids. Kiddle Encyclopedia.