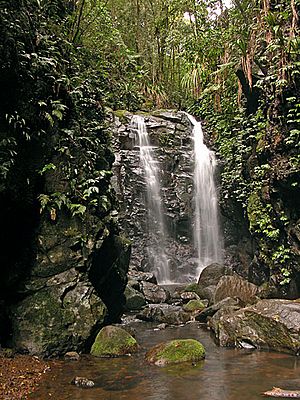 Jungle always refers to a dense forest in a hot climate, such as a tropical rainforest. About 6% of the Earth's surface is classified as jungle. Jungles are vital to sustaining the ecosystems of the Earth as we know it. About 40% of all species live in jungle environments.

The word jungle originates from a Persian word jangal. One of the most common meanings of jungle is land overgrown with tangled vegetation at ground level, especially in the tropics. Typically such vegetation is sufficiently dense to hinder movement by humans, requiring that travellers cut their way through.

Sometimes an urban environment can be called a jungle, as "concrete jungle".

The term may still be used in context to describe the rainforest, a forest characterised by extensive biodiversity and densely tangled plants such as trees, vines, grasses, and also various roses.

There are 4 layers to a jungle. These include (from the top to the bottom): The Emergent layer. The Canopy layer. The Understory. The forest floor.

Jungles in art and literature

Many examples can be found in art and literature: the fanciful jungle paintings of Henri Rousseau, Heart of Darkness by Joseph Conrad, The Jungle Book by Rudyard Kipling, and Tarzan by Edgar Rice Burroughs.

All content from Kiddle encyclopedia articles (including the article images and facts) can be freely used under Attribution-ShareAlike license, unless stated otherwise. Cite this article:
Jungle Facts for Kids. Kiddle Encyclopedia.