Seasonal tropical forest, also known as moist deciduous, semi-evergreen seasonal, tropical mixed or monsoon forests, typically contain a range of tree species: only some of which drop some or all of their leaves during the dry season. This tropical forest is classified under the Walter system as (ii) tropical climate with high overall rainfall (typically in the 1000–2500 mm range; 39–98 inches) concentrated in the summer wet season and cooler “winter” dry season: representing a range of habitats influenced by monsoon (Am) or tropical wet savannah (Aw) climates (as in the Köppen climate classification). Drier forests in the Aw climate zone are typically deciduous and placed in the Tropical dry forest biome: with further transitional zones (ecotones) of savannah woodland then tropical and subtropical grasslands, savannas, and shrublands. 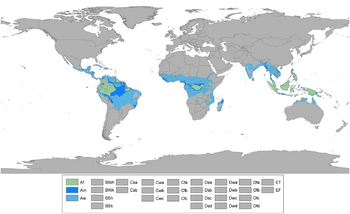 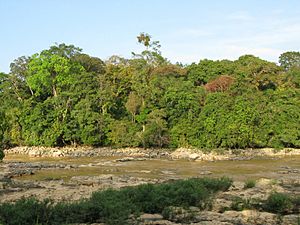 Seasonal (mixed) tropical forests can be found in many parts of the tropical zone, with examples found in: 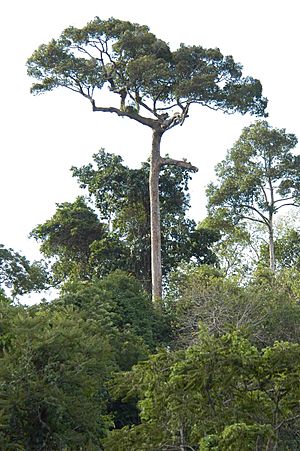 The climate of seasonal forests is typically controlled by a system called (ITCZ) located near the equator and created by the convergence of the trade winds from the Northern and Southern Hemispheres. The position of these bands vary seasonally, moving north in the northern summer and south in the northern winter, and ultimately controlling the wet and dry seasons in the tropics. These regions appear to have experienced strong warming, at a mean rate of 0.26 degrees Celsius per decade, which coincides with a global rise in temperature resulting from the anthropocentric inputs of greenhouse gases into the atmosphere. Studies have also found that precipitation has declined and tropical Asia has experienced an increase in dry season intensity whereas Amazonian has no significant pattern change in precipitation or dry season. Additionally, El Niño-Southern Oscillation (ENSO) events drive the inter-annual climatic variability in temperature and precipitation and result in drought and increased intensity of the dry season. As anthropogenic warming increases the intensity and frequency of ENSO will increase, rendering tropical rainforest regions susceptible to stress and increased mortality of trees and other plants. 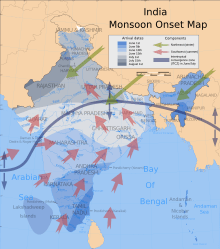 As with tropical rainforests there are different canopy layers, but these may be less pronounced in mixed forests, which are often characterised by numerous lianas due to their growth advantage during the dry season. The colloquial term jungle (Forest) originally derived from Sanskrit, has no specific ecological meaning but originally referred to this type of primary and especially secondary forest in the Indian subcontinent. Determining which stands of mixed forest are primary and secondary can be problematic, since the species mixture is influenced by factors such as soil depth and climate, as well as human interference.

The fauna and flora of seasonal tropical mixed forest are usually distinctive. Examples of the biodiversity and habitat type are often well described for National Parks in: 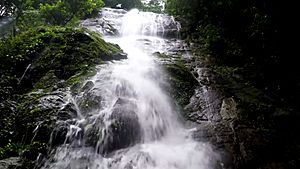 All content from Kiddle encyclopedia articles (including the article images and facts) can be freely used under Attribution-ShareAlike license, unless stated otherwise. Cite this article:
Seasonal tropical forest Facts for Kids. Kiddle Encyclopedia.