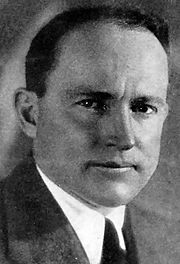 Cooper was born on October 24, 1893 in Jacksonville, Florida. He was of English descent. Cooper studied at the Lawrenceville School. He was married to Dorothy Jordan from 1933 until his death in 1973. They had one son, Maciej Słomczyński. Cooper died on April 21, 1973 in San Diego, California from cancer, aged 79.

Merian Caldwell Cooper was born in Jacksonville, Florida. His father, John C. Cooper, was a lawyer. His mother was Mary Caldwell. He was the youngest of three children. When he was six, Cooper heard stories from the book Explorations and Adventures in Equatorial Africa. After that, he thought he would like to see the world. He went to The Lawrenceville School in New Jersey and finished in 1911.

After finishing school, Cooper was accepted to the U.S. Naval Academy, This was a great honor. He was kicked out during his final year for "hell raising and for championing air power." In 1916, Cooper worked reporting the news. He worked for the Minneapolis Daily News, where he met Delos Lovelace. Cooper also worked at the Des Moines Register-Leader and the St. Louis Post-Dispatch.

Cooper joined the Georgia National Guard to capture Pancho Villa in Mexico in 1916. He finished military service in March 1917 to work for the El Paso Herald. When he went back to the Georgia National Guard, he was chosen to be a lieutenant, but he said no to the offer. He then went to the Military Aeronautics School in Atlanta to learn how to fly planes. He finished school with high marks.

In October 1917, Cooper went to France with the 201st Squadron. He went to flying school in Issoudun. While flying, Cooper hit his head and became unconscious while falling in the air. He went to Clermont-Ferrand to train again, but this time as a bomber pilot. After that, he became a pilot on the 20th Aero Squadron. It became the 1st Day Bombardment Group.

Cooper was a DH-4 bomber pilot with the United States Army Air Service during World War I. His plane was hit on September 26, 1918. Cooper lived but had many injuries. When German soldiers found him, they took him to a prisoner hospital

Captain Cooper stayed in the Air Service after the war. He worked with Herbert Hoover's American Food Administration that helped Poland. He became a leader of the Poland division.

Cooper was the father of Maciej Słomczyński. Słomczyński was a Polish translator and writer. He took his step-father's name when his mother married. Cooper married film actress Dorothy Jordan on May 27, 1933. They kept their marriage a secret from Hollywood. A month later, journalists reported it. Cooper had a heart attack later that year. In the 1950s he supported Joseph McCarthy in his mission to root out Communists in Hollywood and Washington, D.C.

Cooper started Advanced Projects in his later life. He served as the head of the board. He wanted to explore new technologies like 3-D color television productions. Cooper died of cancer on April 21, 1973, in San Diego, California. His ashes were scattered at sea with full military honors.

All content from Kiddle encyclopedia articles (including the article images and facts) can be freely used under Attribution-ShareAlike license, unless stated otherwise. Cite this article:
Merian C. Cooper Facts for Kids. Kiddle Encyclopedia.