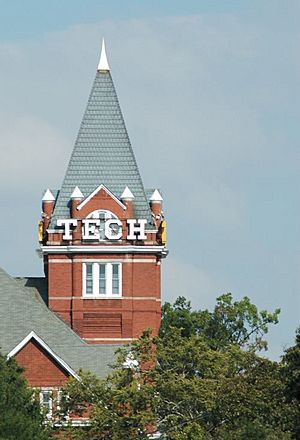 The Tech Tower, a big building at the Georgia Institute of Technology

The Georgia Institute of Technology is a public university (school for after high school) in Atlanta, Georgia. It is also known as Georgia Tech.

It focuses primarily on engineering, science and computer science, but also has schools of management, architecture, and liberal arts.

When it opened in 1885, the school's main focus was on practical experience (learning things by doing them); students spent half of their time in class, and half in the shop.

In 1961, it was the first university in the South to integrate (let people of different races go to school together) without a court order.

The school's colors are white and old gold (mustard yellow). Their mascot is Buzz, a Yellow Jacket (a kind of bee-like wasp).

All content from Kiddle encyclopedia articles (including the article images and facts) can be freely used under Attribution-ShareAlike license, unless stated otherwise. Cite this article:
Georgia Institute of Technology Facts for Kids. Kiddle Encyclopedia.