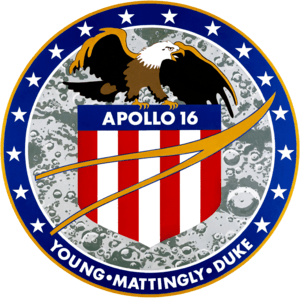 Apollo 16 was the tenth manned space flight in NASA's Apollo program. It was the 5th of six Apollo missions to land on the Moon. It was a J-Type mission, as having a longer stay on the Moon. Launched on April 16, 1972, Ken Mattingly stayed in orbit around the Moon in the Apollo Command Module, Casper. He spent 3 days, 9 hours and 28 minutes by himself, the longest solo US space flight. On the Moon, astronauts John Young and Charles Duke got to put the Lunar Roving Vehicle ("moon buggy") through a series of tests, including s-turns, hairpin turns and quick stops. John W. Young was the commander of the mission.

A satellite was launched on the return journey to examine the Moon's mass and gravitation, space particles near the Moon, and the interaction of magnetic fields between the Moon and Earth. The mission was stopped one day early as there were several problems with the spacecraft.

All content from Kiddle encyclopedia articles (including the article images and facts) can be freely used under Attribution-ShareAlike license, unless stated otherwise. Cite this article:
Apollo 16 Facts for Kids. Kiddle Encyclopedia.