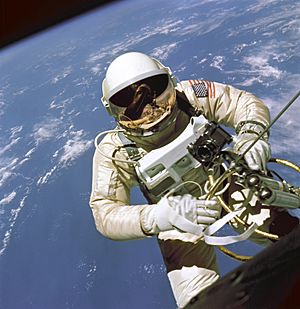 Astronauts from Russia, the United States and China have done EVAs.

The first moonwalk was made by Neil Armstrong and Buzz Aldrin on July 21, 1969 (UTC), during the Apollo 11 trip to the Moon. This first Moon walk lasted for 2 hours and 32 minutes. Twelve human beings have walked on the surface of the Moon. 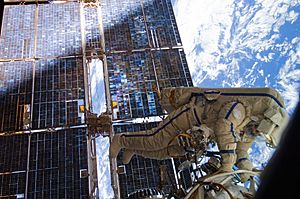 In 1973, astronauts made spacewalks to repair Skylab, the first space station sent into space by the United States. Skylab had been damaged while it was being launched into space. Many spacewalks were made to build the International Space Station (ISS). Spacewalks are still made to maintain the ISS and fix it when there is a problem.

All content from Kiddle encyclopedia articles (including the article images and facts) can be freely used under Attribution-ShareAlike license, unless stated otherwise. Cite this article:
Extravehicular activity Facts for Kids. Kiddle Encyclopedia.