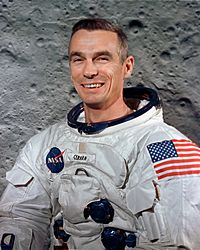 He traveled into space three times: as Pilot of Gemini 9A in June 1966, as Lunar Module Pilot of Apollo 10 in May 1969, and as Commander of Apollo 17 in December 1972, the final Apollo lunar landing.

On Apollo 17, Cernan became the eleventh person to walk on the Moon and the most recent man to walk on the Moon since he was the last to re-enter the Lunar Module Challenger after the mission's third and final mission. Cernan was also a backup crew member for the Gemini 12, Apollo 7 and Apollo 14 space missions.

All content from Kiddle encyclopedia articles (including the article images and facts) can be freely used under Attribution-ShareAlike license, unless stated otherwise. Cite this article:
Eugene Cernan Facts for Kids. Kiddle Encyclopedia.