Apollo 11 was the first flight to send people to the moon. It was done by NASA, the American space group. It went up to space on 16 July 1969, carrying three astronauts: Neil Armstrong, Buzz Aldrin and Michael Collins. On 20 July 1969, Armstrong and Aldrin became the first humans to land on the moon, while Collins stayed in orbit around the Moon.

The flight was part of the Space Race. It finished the plan set by John F. Kennedy in 1961 to "land a man on the moon, and return him safely to the Earth", before the 1960s ended.

Going to and from space 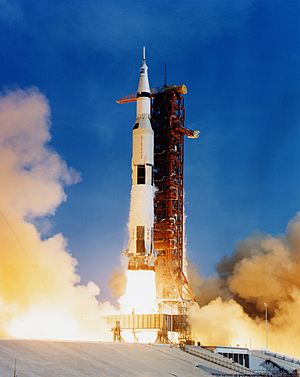 Millions of people around the world viewed the flight of Apollo 11 on television. When the rocket was sent to space it was a world-wide event. Richard Nixon, who was then President, watched the from the White House as the rocket went up. A Saturn V rocket took flight from the Kennedy Space Center in America.

About two hours after leaving Earth the bit with the people in it went away from the main rocket. The bit with the people in it had two parts, the Apollo command and service module called Columbia and the Apollo Lunar Module called Eagle. Columbia was the space ship that stayed in space, and Eagle was the moon-landing space ship. 3 days later the team entered Lunar Orbit (orbit around the moon). A day later the Eagle went away from Columbia. The Eagle landed safely on the moon with Neil Armstrong and Buzz Aldrin inside. During the landing there were several problems with the computer. To land safely Armstrong had to fly the Eagle himself. They landed with only 25 seconds of fuel left.

Events on the moon 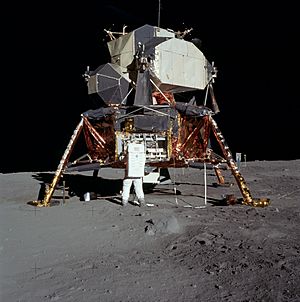 The Landing Module on the moon. Buzz Aldrin is unpacking experiments to the front of the picture. 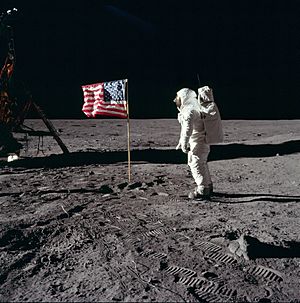 Buzz Aldrin with the US flag soon after stepping onto the surface.

The first thing Buzz Aldrin did upon touch down was to pray. He also read some words of Jesus. He did not reveal his plan to do this because someone had just made a lawsuit to stop astronauts from doing religious things in space. Armstrong became the first human to walk and speak on the moon's surface. The first words he said were:

That's one small step for [a] man, one giant leap for mankind.

For the next two and a half hours Aldrin and Armstrong took notes, pictures and made holes to get moon rock. The landings were watched by over six hundred million people on Earth using the very big radio telescope in Australia. They did many experiments, for example the collecting of moon rocks and dust. An American flag was set up and photographed on the moon.

Before doing that, President Richard Nixon did a telephone call to them:

Nixon: Hello, Neil and Buzz. I'm talking to you by telephone from the Oval Room at the White House. And this certainly has to be the most historic telephone call ever made. I just can't tell you how proud we all are of what you've done. For every American, this has to be the proudest day of our lives. And for people all over the world, I am sure they too join with Americans in recognizing what an immense feat this is. Because of what you have done, the heavens have become a part of man's world. And as you talk to us from the Sea of Tranquillity, it inspires us to redouble our efforts to bring peace and tranquillity to Earth. For one priceless moment in the whole history of man, all the people on this Earth are truly one: one in their pride in what you have done, and one in our prayers that you will return safely to Earth.

Armstrong: Thank you, Mr. President. It's a great honor and privilege for us to be here, representing not only the United States, but men of peace of all nations, and with interest and curiosity, and men with a vision for the future. It's an honor for us to be able to participate here today.

Leaving the moon and returning to Earth 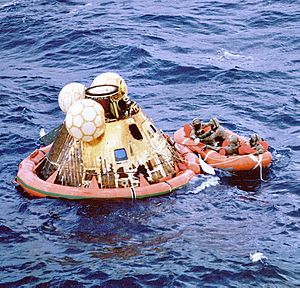 After finishing their work, Armstrong and Aldrin returned to the Eagle and slept for seven hours before starting to leave. While preparing to leave, Aldrin broke the circuit breaker in the engine starter. Armstrong used a pen to bridge the circuit and stop them from being stuck on the moon. Aldrin and Armstrong left many things on the moon: an American flag, a few experiments, a golden feather, a logo of Apollo 1 and some bronze coins honoring Yuri Gagarin and Vladimir Komarov. He also left a sign on the moon, with a message from the human race. The sign reads:

Here men from the planet Earth first set foot upon the Moon, July 1969 A.D. We came in peace for all mankind.

On July 24 the three astronauts returned to Earth and were immediately placed into quarantine (kept away from other people), in case they brought back some disease from the moon. They stayed in quarantine for three weeks. When they got out the men were heroes around the world. They had dinner with President Nixon, a parade in New York City and another one in Chicago. The three were also on many television shows. 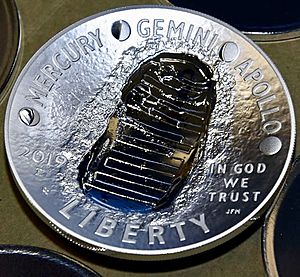 On June 10, 2015, Congressman Bill Posey introduced resolution H.R. 2726 to the 114th session of the United States House of Representatives directing the United States Mint to design and sell commemorative coins in gold, silver and clad for the 50th anniversary of the Apollo 11 mission. On January 24, 2019, the Mint released the Apollo 11 Fiftieth Anniversary commemorative coins to the public on its website.

Beginning July 9, 2019, PBS aired a three-night, six-hour documentary, called Chasing the Moon, which examined the events leading up to Apollo 11. An accompanying book of the same name was also released.

New phrases appeared in the English language. "If they can send a man to the Moon, why can't they ...?" became a common saying following Apollo 11. Armstrong's words on the lunar surface also spun off various parodies.

All content from Kiddle encyclopedia articles (including the article images and facts) can be freely used under Attribution-ShareAlike license, unless stated otherwise. Cite this article:
Apollo 11 Facts for Kids. Kiddle Encyclopedia.