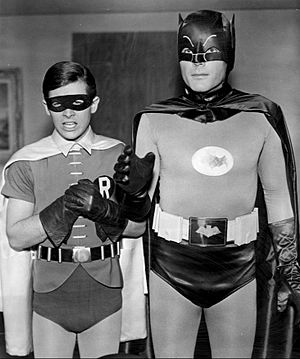 A hero (Greek: ἣρως) in Greek mythology is a half-god/half-human being. Herakles, for example, was the son of the god Zeus and the mortal woman Alkmene. Heroes performed extraordinary feats and were worshipped in hero cults.

In the modern world, hero has lost its ancient meaning. It now means someone who is courageous ("The firefighter who saved my baby is a hero."). Heroes are "heroic", they have "heroism". They help in saving people or a society from bad people, villains, or natural disasters. A hero can also be someone who is helpful, polite, or helping people who need it. The word is used in the sports world to mean an extraordinary player or athlete ("football hero", "Olympic hero", etc.). The female equivalent of the male hero is the "heroine".

Sometimes, the protagonist (or main character) of a story is called the "hero" of the work (a book/movie/etc.).

All content from Kiddle encyclopedia articles (including the article images and facts) can be freely used under Attribution-ShareAlike license, unless stated otherwise. Cite this article:
Hero Facts for Kids. Kiddle Encyclopedia.