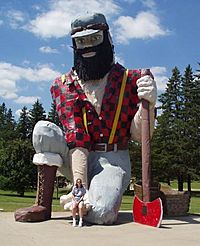 A folk hero is a person, who may or may not have existed, and is famous and well liked by people, or people of a certain country. Usually it is someone who helped the common people or fought against the authorities, such as a bad king. People tells stories about folk heroes, most of their stories have been passed down orally, and changed to fit the situations. They usually have a special skill or trait of some sort (Paul Bunyan is very tall).

Some famous folk heroes are:

All content from Kiddle encyclopedia articles (including the article images and facts) can be freely used under Attribution-ShareAlike license, unless stated otherwise. Cite this article:
Folk hero Facts for Kids. Kiddle Encyclopedia.