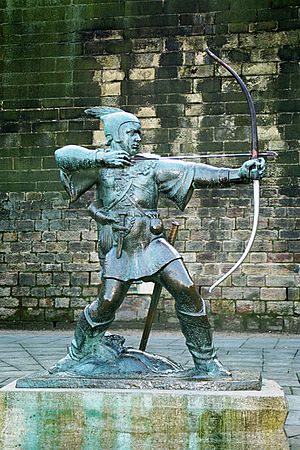 A statue of Robin Hood near the castle in Nottingham

Robin Hood is a folk hero from the Middle Ages. He is a legendary person whom people have told stories about for many years. Robin Hood is one who still remains popular. His story has been featured in books, plays, movies and cartoons as well.

There are many variations of his stories. Usually, Robin Hood is an outlaw who lives in Sherwood Forest near the town of Nottingham, England. His enemies are Prince John (who is temporarily on the throne because his brother, King Richard the Lionheart is away in the Middle East fighting in the Crusades), and the corrupt Sheriff of Nottingham, who abuse their powers and take money from the people who need it. Robin Hood uses his archery skills and his wits to steal the money back, and return it to the poor. Accompanying Robin are his faithful followers The Merry Men. They include Little John. Much the Millers son, Will Scarlet, Friar Tuck and Alan a Dale.

There have been many movies about Robin Hood, including "The Adventures of Robin Hood" starring Errol Flynn. In the 1970s, Disney made a movie where the characters were shown to be animals. Robin and his lover (Marian) are foxes.

All content from Kiddle encyclopedia articles (including the article images and facts) can be freely used under Attribution-ShareAlike license, unless stated otherwise. Cite this article:
Robin Hood Facts for Kids. Kiddle Encyclopedia.