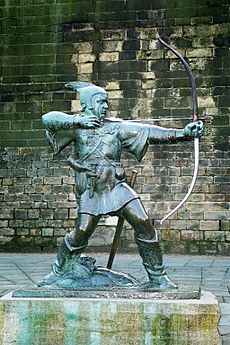 An outlaw or bandit is a person who is "outside the law" usually because they have committed serious crimes.

A longtime criminal can be declared an outlaw, which means the outlaw cannot use the legal system to protect himself if needed.

All content from Kiddle encyclopedia articles (including the article images and facts) can be freely used under Attribution-ShareAlike license, unless stated otherwise. Cite this article:
Outlaw Facts for Kids. Kiddle Encyclopedia.